Dollar Regains Ground after US Exempts Some Tariffs on China

Dollar regains some ground in early US session as US exempts tariffs on some Chinese products temporarily. It seems that both sides are keen to create the right mood for continuing negotiations, at least for now. Though, at this points, Swiss Franc and Yen remain the stronger ones for the day. Sterling has turned from the strongest to one of the weakest after Ireland poured cold water on Brexit deal. But New Zealand Dollar is currently the weakest.

Technically, both GBP/USD and GBP/JPY are back below 1.2502 and 135.07 fibonacci levels respectively, after failing to sustain above. Attention will now be on sign of selloff that suggests rejection. Focuses before weekly close will be on whether AUD/USD would extend the fall from 0.6894, and whether USD/CAD could resume the rebound from 1.3133.

US exempts tariffs on more than 400 Chinese products lines

US Trade Representative Office is temporarily exempting more than 400 lines of Chinese import from tariffs imposed last year. Exclusions included Christmas tree lights, plastic straws, dog leashes and printed circuit boards. According to US USTR documents, the exemptions stem from more than 1100 exclusions requests made by companies and other entities in US.

For now, the exemptions on their own are seen as a move to address the tariffs impact on US companies, rather than concessions to China. Nevertheless, the timing is interesting as both sides seem to be creating some positive atmosphere for October meeting.

St. Louis Fed President James Bullard voted for a -50bps rate cut earlier this week, dissenting other’s decisions of -25bps cut. He explained that a large cut “would provide insurance against further declines in expected inflation and a slowing economy subject to elevated downside risks.” And, “it is prudent risk management, in my view, to cut the policy rate aggressively now and then later increase it should the downside risks not materialize.” He also noted that “many estimates of recession probabilities have risen from low to moderate levels.” In particular, data pointed to a contraction in manufacturing. Meanwhile, “the yield curve is inverted, and our policy rate remains above government bond yields”.

Boston Fed President Eric Rosengren dissented to Fed’s rate cut this week and voted for no change. In a statement released today, he explained that “additional monetary stimulus is not needed for an economy where labor markets are already tight, and risks further inflating the prices of risky assets and encouraging households and firms to take on too much leverage.” He also warned that “While risks clearly exist related to trade and geopolitical concerns, lowering rates to address uncertainty is not costless.”

Canada retail sales rose 0.4% mom in July, to CAD 51.5B, matched expectations. Higher sales were reported in 6 of 11 subsectors representing 71% of retail trade. Ex-auto sales, on the other hand, dropped -0.1% mom, below expectation of 0.2% mom. Provincially, retail sales were up in six provinces, with the largest increases observed in Ontario and, to a lesser extent, the Prairie provinces.

Ireland Coveney: Not close to Brexit deal even mood music has improved

Irish Foreign Minister Simon Coveney told BBC radio that “the mood music has improved” for Brexit. And, “We all want a deal, we all know that a no-deal will be a lose, lose, lose for everybody, but particularly for Ireland and Britain.”

However, he added that “But I think we need to be honest with people and say that we’re not close to that deal right now. But there is an intent I think by all sides to try and find a landing zone that everybody can live with here.”

Earlier, Sterling was lifted by European Commission President Jean-Claude Juncker’s comment as believed that a Brexit deal can be reached by October 31. Though, the Pound quickly pared back earlier gains on Coveney.

Japan CPI core slowed to 0.5%, further away from BoJ’s target

The CPI core reading moved further away from BoJ’s 2% inflation target. It’s expected to stay subdued in the coming months as as lower mobile phone service fees and education costs weigh on prices. Additionally, the upcoming sales tax hike (from 8% to 10%) in October may further hit consumer sentiment and weigh on underlying inflation.

EUR/USD weakens in early US session but stays consolidation from 1.0926 after all. Intraday bias remains neutral at this point. Outlook remains bearish as long as 1.1164 resistance holds. On the downside, sustained break of 1.0926 will resume lager down trend from 1.2555 for 1.0813 fibonacci level next. However, decisive break of 1.1164 will be an early indication of larger reversal and target 1.1249 resistance. 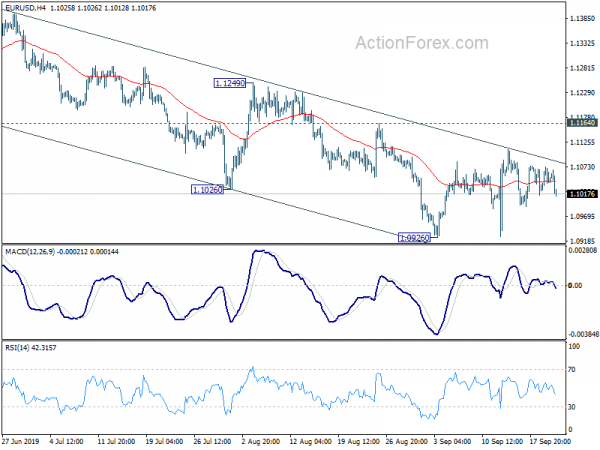 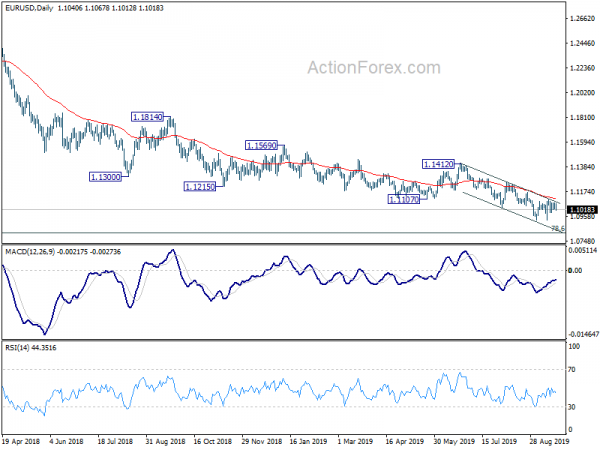