GBPAUD Spikes To 4-Month High, Additional Gains Could Be Limited

GBPAUD stretched Thursday’s impressive rally to a four-month high of 1.8492 on Friday and is ready to close the week up by 1.7%.

The RSI has also picked up steam and is currently pointing towards its 70 overbought mark, while the Stochastics have yet to confirm overbought conditions, suggesting that the bullish momentum is likely to stay in a limited time frame.

On the way up, the bulls could take a break near the 1.8600 round-level – a congested area during the spring period – while higher 1.8720 could play a tough game as in the past. Running above the latter, the bulls would need to knock the 1.8786 resistance to reach the 3-year peak of 1.8880.

In the negative scenario, if the price reverses lower, traders could initially look for nearby support around 1.8400 and then at 1.8300. Breaking under the 200-day simple moving average (SMA), which currently stands at 1.8200, the next target will be 1.8100.

Meanwhile in the three-month window, the price managed to escape from the 1.7558 -1.8400 range, though not far away, switching the outlook from neutral to slightly positive. An extension above 1.8600 could confirm the outlook improvement.

Summarizing, GBPAUD is viewed strongly positive in the short-term, while in the medium-term, the market has yet to confirm a bullish outlook. 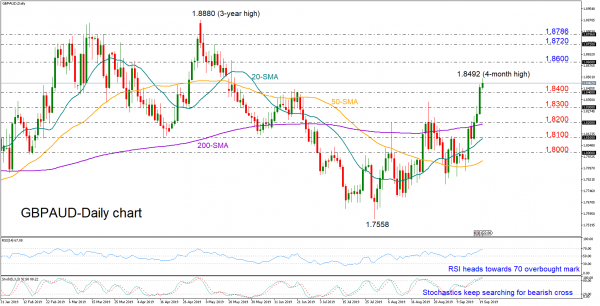