EURNZD is again attempting to overcome the 1.7590 resistance region tested multiple times over August. The bulls recent rally from 1.7000 is backed by the Tenkan-sen that has already distanced itself from the Kijun-sen, as well as the momentum oscillators reflecting a persisting positive picture.

Furthermore, the 21-period simple moving average (SMA) has completed a bullish cross of the 100- and 200-period SMAs. That said, the 100-period SMA has approached the 200-period SMA, and looks to complete a bearish cross, thus traders need to be aware of a possible correction or stall in the price.

If the bears take back control at the 1.7590 level and drive the pair lower, support could come initially from the 1.7474 level. Correcting lower, the Kijun-sen could interrupt the move ahead of the more challenging resistance area of 1.7340, which is the 23.6% Fibonacci retracement of the up leg from 1.6524 to 1.7590, and where the SMAs have converged.

In the positive scenario, if the bulls manage to clearly move above the restricting ceiling of 1.7590, which has held for one-and-a-half-months, the price could jump to test the 1.7720 resistance. If the buying interest persists the 2018 September highs of 1.7820 could grab traders’ attention.

Overall, a decisive break above 1.7590 would revive the short- and medium-term bullish bias. However, a close below 1.7000 would complete the triple top pattern and turn the bias to bearish. 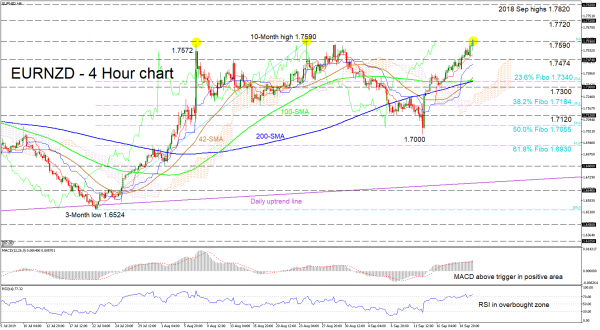