Eurozone Flash PMIs to Hold Steady, Unlikely to Knock Euro Out of Range

The preliminary readings for the September PMIs are due out of the Eurozone on Monday at 08:00 GMT. The data will be closely watched as there have been some signs that business confidence has started to perk up lately, albeit only moderately. And with the European Central Bank unlikely to turn on the stimulus taps again anytime soon following its contentious decision to restart QE, the euro could easily be buoyed from further improvements in economic sentiment.

Is a growth rebound in progress?

While it may be too early to assume that the worst is over for the euro area, there have been some early indications that the slowdown is bottoming out. The August PMIs by IHS Markit showed both manufacturing and services activity picking up over the month and other surveys for August were also positive. The manufacturing downturn remains a concern, however, particularly in Germany – Europe’s largest economy.

Brexit and trade war uncertainties have taken their toll on German exporters but a recent change of tune by Germany’s government on the need for fiscal stimulus has raised hopes that the country will be able to ride out the headwinds currently facing it.

The latest round of quantitative easing announced by the ECB earlier this month, together with the cut in the deposit rate, should also help the Eurozone economy get back on its feet after a year and a half of decelerating growth.

September PMIs not expected to thrill

The flash PMIs for September are not anticipated to be anything to shout about but will likely confirm that things are at least not getting any worse. The manufacturing PMI is forecast to rise for the second straight month from 47.0 to 47.3, while the services PMI is expected to ease slightly to 53.3. The composite PMI, which measures both manufacturing and services activity, is forecast to remain unchanged at 51.9. 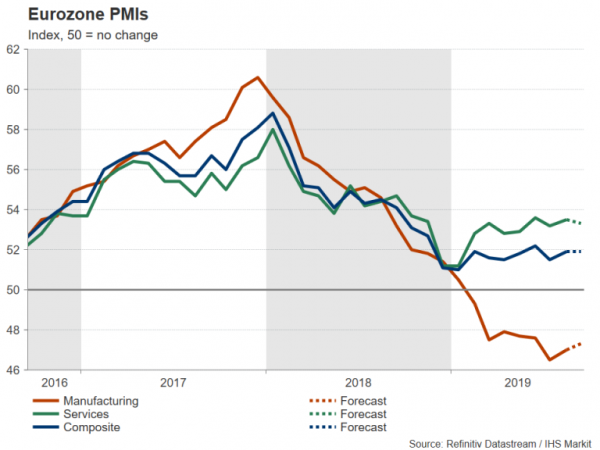 The data is likely to set the euro’s tone for the week on Monday, though comments by ECB President Mario Draghi will also be crucial. Draghi will speak before the European Parliament’s Economic and Monetary Affairs Committee on Monday at 13:00 GMT and it will be his first appearance since the September 12 policy meeting.

The ECB’s decision to cut rates deeper into negative territory and resume asset purchases has led to a public row within the Governing Council amid fierce opposition to the stimulus plan by some central bank heads such as those of Germany, France and the Netherlands.

Draghi will probably try to play down the differences, whilst any indication that further monetary stimulus may not be needed could boost the euro.

Euro waiting to break out of range

The single has been trading sideways after plunging to a more than two-year low of $1.0924 on September 3. Should the PMIs surprise on the upside and Draghi isn’t too negative on the outlook, the euro could make its way up to the 50-day moving average, which is converging with the 38.2% Fibonacci retracement of the June-September downleg at $1.1110. A break above this resistance zone would bring into the range the 50% Fibonacci at $1.1168.

However, a disappointing PMI report could drive the euro back towards the $1.0924 trough, which if breached, would open the prospect of a steeper slide towards the $1.08 level.