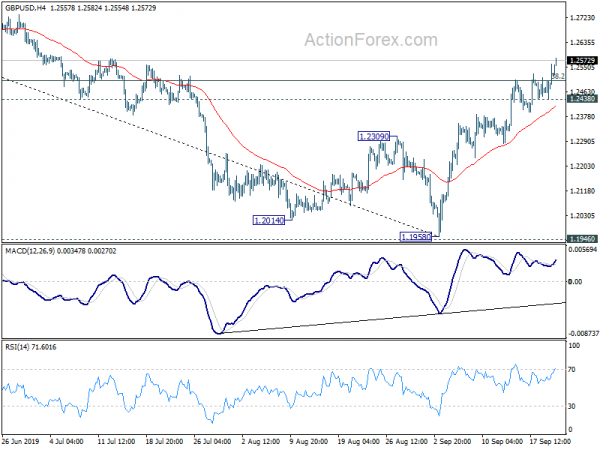 Sterling rises broadly today on optimism that a Brexit deal could finally be reached by the end of next month. For now, Swiss Franc and Yen are following as next strongest. On the other hand, Dollar turns soft as post-FOMC lift continued to fade, followed by New Zealand Dollar and than Canadian. For the week, the Pound is currently the strongest one, followed by Yen and then Canadian. Kiwi is the weakest, followed by Aussie.

EU Juncker said Brexit deal could be reached by Oct 31

Deputy level US-China trade talks stated yesterday in Washington in preparation for the top level meeting next month. It’s reported that agriculture was having a disproportionate amount of time in the discussions. But there is not official confirmation of the news. Yet separately, Agriculture Department Secretary Sonny Perdue said yesterday that Chinese officials will visit American farms next week as part of efforts to “build goodwill.” But he wasn’t sure if China will announcement any purchases during the visit.

At the same time, Commerce Secretary Wilbur Ross reiterated that the administration is pushing for something “more complicated than just buying a few more soybeans.” He told Fox Business Network that “what we need is to correct the big imbalances, not just the current trade deficit, but also the structural imbalances, the impediments to market access, disrespect for intellectual property, forced technology transfers.”

Ex-IMF chief, soon to be ECB President, Christine Lagarde urged global policymakers to “try to reduce the fragility and … resolve the uncertainty,” facing the global economy. She noted that “what we have at the moment is a rather mediocre growth” which is “fragile and it is under threat.”

She added that “central bankers have done an awful lot and were for many years regarded as the only game in town”. And government policies must not step up. However, she also warned that experience showed political intervention on central banks “doesn’t pan out very well”. And central banks should strive to be “predictable”, because “there is enough uncertainty around the world, not to add the uncertainty of what a central banker is going to do.”

Japan CPI core slowed to 0.5%, further away from BoJ’s target

The CPI core reading moved further away from BoJ’s 2% inflation target. It’s expected to stay subdued in the coming months as as lower mobile phone service fees and education costs weigh on prices. Additionally, the upcoming sales tax hike (from 8% to 10%) in October may further hit consumer sentiment and weigh on underlying inflation.