Dollar stays firm in rather quiet pre-weekend trading today. EUR/USD’s break of 1.0926 support is a clear sign of greenback’s strength. Yet, we’d still prefer to seen more buying in other Dollar pairs to confirm. For the week, European majors are generally the weakest as led by Sterling. Dollar and commodity currencies are mixed.

It’s reported that US-China trade negotiations will resume on October 10-11 in Washington. Chinese Vice Premier Liu He will lead a delegation representing Beijing. US President Donald Trump had previously delayed a planned tariffs escalation, raising tariffs on USD 250B in Chinese imports to 30%, from October 1 to October 15. Whether such increase would be imposed would be the main reflection on the progress at the upcoming meeting.

Yesterday, Chinese Ministry of Commerce spokesman Gao Feng confirmed that China has resumed its purchase of US agricultural products. Also, tariffs on those orders will be exempted. He noted that both sides are maintaining “close communication”. And, “China’s stance has always been consistent and clear, hoping the US side will meet China half way.”

Richmond Fed President Thomas Barkin said in a speech that the economy is giving “conflicting signals. The strength of the labor market might be saying “hold” or even “raise rates”. But low inflation and the bond market might be saying “lower rates.” He also pointed out that there are risks on “both on both sides”. Additional easing could “overstimulate inflation, distort labor markets or fuel an asset price bubble.”. Not easing could undermine Fed’s credibility” and leave policymakers “behind the curve”.

Barkin also talked about several headwinds. There is a “great deal of uncertainty” around trade and politics, which matters for business confidence. He’s “particularly concerned” about the “roller coaster” recently. “Between Brexit, the ongoing negotiations with China, tensions in the Middle East and the political headlines—to name just a few—it’s been tough for businesses to feel like they’re on solid ground.”

EU Juncker: Doing everything possible to get a Brexit agreement

In an interview with German newspaper Augsburger Allgemeine, European Commission Jean-Claude Juncker said he and chief Brexit negotiator Michel Barnier are “doing everything possible to get an agreement” on Brexit. He warned that “if we don’t succeed in the end, the responsibility would lie exclusively on the British side.”

Juncker also said that disorderly Brexit could greatly complicate negotiations on future relationship. He said: “We will want to and need to seal a free trade agreement. But that won’t happen just like that, as some in Britain imagine. Some of the trade deals we sealed in my term of office took many years to reach.”

Looking ahead, Eurozone confidence indicators will be the major focus in European session. Later in the day, US will release durable goods orders, personal income and spending, and U of Michigan consumer sentiment.

EUR/USD’s break of 1.0926 low suggests resumption of larger down trend from 1.2555. Intraday bias is now on the downside for 1.0813 fibonacci level next. On the upside, break of 1.0967 minor resistance will turn intraday bias neutral and bring consolidations. But recovery should be limited by 1.1109 resistance to bring fall resumption. 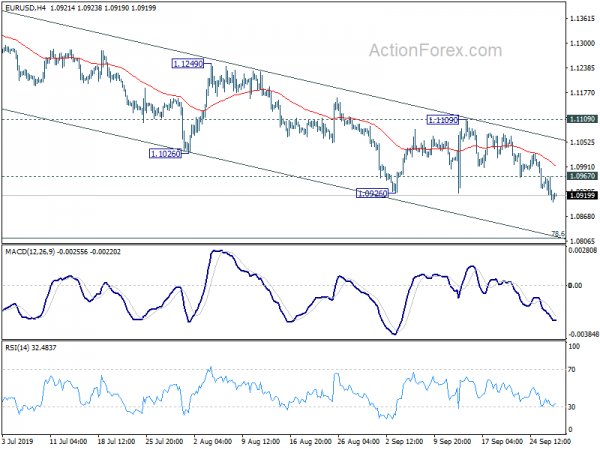 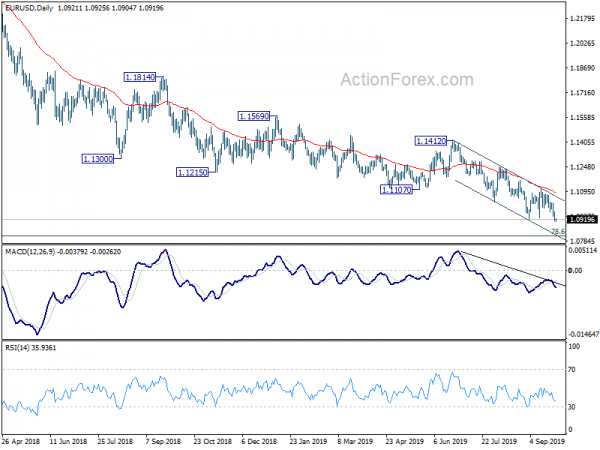