US consumer spending slows in August, while incomes rise 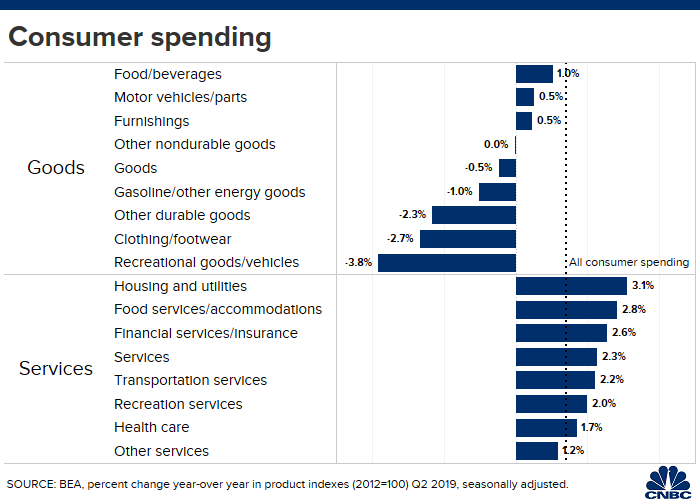 U.S. consumer spending barely rose in August, suggesting that the economy’s main growth engine was slowing after accelerating sharply in the second quarter.

The Commerce Department said on Friday consumer spending, which accounts for more than two-thirds of U.S. economic activity, edged up 0.1% last month as an increase in outlays on recreational goods and motor vehicles was offset by a decrease in spending at restaurants and hotels.

Data for July was revised slightly down to show consumer spending increasing 0.5% instead of the previously reported 0.6% advance. Economists polled by Reuters had forecast consumer spending gaining 0.3% last month.

On a year-over-year basis, consumer spending was up 1.4 percentin the second quarter.

Consumer spending, fueled by the lowest unemployment rate in almost half a century, has been blunting some of the hit on the economy from the White House’s nearly 15-month trade war in China, which has sunk business investment and manufacturing.

But with tariffs on Chinese goods broadened to include consumer goods, there are fears that spending could slow. There are also worries that weak business investment and sluggish profit growth could constrain companies’ ability to continue hiring more workers, and undermine consumer spending.

The Federal Reserve last week cut interest rates for the second time this year, citing the ongoing risks to the longest economic expansion on record from the U.S.-China trade war and slowing global growth.

The U.S. central bank cut rates in July for the first time since 2008. The economy is now in its 11th year of expansion.

Consumer prices as measured by the personal consumption expenditures (PCE) price index were unchanged in August as food prices declined for a third straight month and the cost of energy goods and services dropped 2.0%.

Excluding the volatile food and energy components, the PCE price index edged up 0.1% last month after rising 0.2% in July. That lifted the annual increase in the so-called core PCE price index to 1.8% in August, the biggest gain since January, from 1.7% in July.

The core PCE index is the Fed’s preferred inflation measure and has undershot the U.S. central bank’s 2% target this year.

The economy grew at a 2.0% annualized rate last quarter, slowing from the January-March quarter’s brisk 3.1% pace. The Atlanta Fed is forecast gross domestic product rising at a 1.9% rate in the third quarter.

Personal income rose 0.4% in August after nudging up 0.1% in the prior month. Wages increased 0.6%. With income growth outpacing spending, savings rose to $1.35 trillion from $1.29 trillion in July.