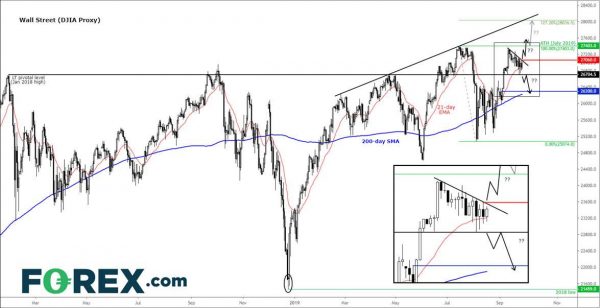 The major US indices have been spending several days in consolidation near their recent highs. As they haven’t dropped more materially on the back of what should have been bearish news (e.g. Trump’s impeachment inquiry; weak macro pointers from Germany and US, and ongoing uncertainties over the US-China trade issue, Brexit and the Middle East situation et. al.) is not exactly bearish, is it? In other words, the markets have absorbed bad news through time than price action. What can’t break you makes you stronger. At the same time, several central bank members have come out in support of more monetary stimulus. Today, for example, the Bank of England’s Saunders said that it was “quite plausible” the next rate move will be down even if we avoid a no-deal Brexit. Those comments sent the FTSE sharply higher. Alongside the European market rally, US index futures have gained ground, suggesting Wall Street will open in the positive later. And given the recent trend of Fridays being rather bullish for the markets, I wouldn’t bet against a sharp rally for the US indices today. Obviously, the big assumption here is that we won’t hear any majorly bad news e.g. a surprise announcement by Trump that the planned US-China trade talks are off. That would be something, right!? But if there is no such news then we could see the markets drift higher into the close.

Indeed, following the rebound in risk assets over the past couple of days, some of the major US indices are threatening to break to new all-time highs again. One of those is the Dow Jones Industrial Average, which is the one we are looking at today. The bulls are happy to see the index make a base above the long-term pivotal level of 26705ish – the high from January 2018. The DJIA has oscillated around this level a few times, but now appears like there is acceptance above it. So, for as long as 26705 hold as support, the path of least resistance would be to the upside. If the DJIA breaks through short-term resistance at 27060 and hold above it then that could pave the way for a run to the July’s all-time high at 27403. However, if the bears win the battle here and push the index below 26705 and there is acceptance below that pivotal level then in that case a drop to the next key support around 26300 would become likely.