Weaker ISM is Just What the DXY Needed 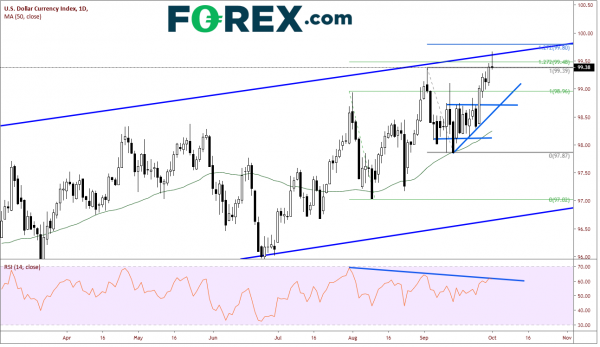 The US ISM Purchasing Managers Index (PMI) headline dropped from 49.1 in August to 47.8 in September, versus an expectation of 50.1!  This is the worst ISM data going back 10 years.   All components were lower as well.  DXY has been on a tear lately after breaking out of the trading range it has been in from September 12th to September 25th.  Nearly 100 pips higher from that breakout near 98.70, the DXY is in need of a correction.  Today, the ISM Manufacturing data was the catalyst to allow the US Dollar to pull back. Support for DXY will be at the breakout of the prior trading range and the upward sloping trendline near 98.70/98.80.  Below that, the 50 Day Moving Average is at 98.56.  Third support level is near the lows of august 9th and the long-term upward sloping channel line near 97.00.

If the DXY can unwind and pullback a bit to support, this may give it permission to move higher.  Tomorrow we have ADP employment data released, and on Friday Non-Farm Payrolls. If these numbers come out better than expected, the DXY may continue its move higher and test the 100 level.