AUD/USD Hits Lowest Level in a Decade – More to Come? 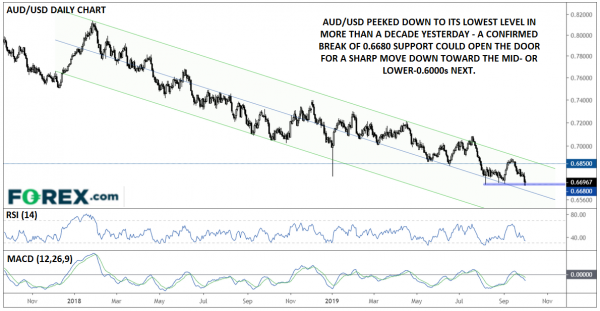 For many traders, yesterday’s abysmal ISM Manufacturing PMI reading led to a “sell first, ask questions later” response in risk assets. Everything from global equities to oil to growth-sensitive currencies have fallen sharply as markets increase bets on a coordinated global slowdown.

Coming on the back of the Tuesday’s RBA meeting, when the central bank cut interest rates to a record low, the Australian dollar has been particularly hard hit. The aussie has now reversed its entire rally from the first half of September against the US dollar, and AUD/USD even peeked to its lowest level since March 2009, the depths of the Great Financial Crisis: As the chart above shows, the pair remains in a longer-term bearish channel dating back to early 2018. After last month’s bounce, the RSI indicator is no longer in oversold territory, and the MACD continues to trend lower below both its signal line and the “0” level, showing strong selling momentum.

In other words, the stage is set for a strong continuation lower if the break below this summer’s lows near 0.6680 is confirmed. To the downside, there’s little in the way of potential support until the mid- or even lower-0.6000s. From a fundamental perspective, another round of negative economic data or a re-escalation of US-China trade tensions (as soon as next week’s high-level meetings in Washington DC) could be the catalyst for another leg lower.