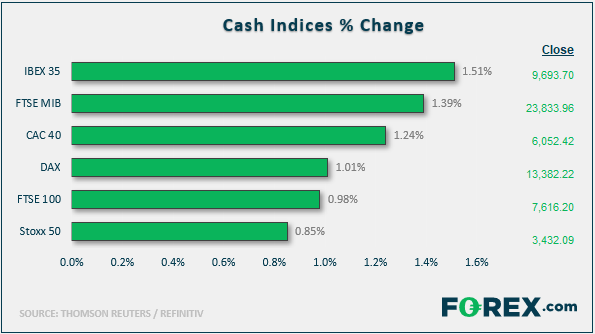 Thursday’s stock markets are what it looks like when risk appetite hits the ground running for the first session of the decade. European shares, U.S. stock index futures and Asia-Pacific indices have been on an unbroken tear

The White House’s signal that a phase one trade deal with Beijing is on track—Donald Trump sees the accord signed on 15th January—is one stimulus. China’s planned 50 basis point required reserve ratio cut for large banks that will take effect on Monday, is the other biggie

As much as investors are keen to ring-in the New Year with sure-footed gains, these influences are of course ‘so 2019’. Not least because predicating a positive risk-asset rally on them continues to ignore a whole host of well-rehearsed reasons to remain cautious. China’s policy easing isn’t even much of a surprise. Official impetus for Beijing to soften monetary conditions is typical at this time of the year ahead of Chinese New Year and Spring Festival holidays. (In 2020 they fall on 24th to 30th January.) Furthermore, the cut was flagged by Premier Li Keqiang late last month. In the context of the PBOC’s well-telegraphed aim to keep downward pressure on rates, there are also good reasons to see future policy reductions as already priced in to an extent

As for trade, at best ‘phase one’ caps the bottle, but the genie’s long gone. Major uncertainties remain as to when comprehensive agreements on the most tortuous aspects of U.S.-China commercial relations will be possible, if ever. An end of escalation counts for much, sure. Unfortunately though, risk appetite looks set to remain vulnerable to further discouraging developments on the trade front and beyond. Europe has already been delivered of a timely reminder that Eurozone economy remains in less-than-solid shape, judging by a sobering set of PMI readings out earlier. For today though, optimistic sentiment is probably most of what you need to know

Financials are also spot lit, mostly on the back of insurers but also of course on banks. A Polish theme emerged there as well as lenders in that country were another sector sharply ahead, enabling Warsaw’s market to rise higher than most of the region’s indices. The WIG 20 was up 1.8% gain, matching the ISEQ All-Share’s move in Dublin, but below OMX Stockholm’s 2% advance. Polish shares were among 2019’s worst performers at the index level The pound had a good holiday whilst most participants were away, so perhaps, we shouldn’t read too much into a standout retracement by sterling. GBP/USD was second-biggest faller among majors just now. Sterling implied volatility is lower than December’s fever pitch, but high enough above the G10 average to signal that things are still not particularly normal

Meanwhile, the dollar joins the reversion theme, breaking a four-day slump with a 0.2% bounce for the Dollar Index. That adds pressure across the board

The euro managed to muffle the downside though: data out earlier were weak, but they were better than expected

USD/CHF saw 0.9647 highs; recovering from a 16-month low in the middle of last month

Aussie and Kiwi bear the brunt. News out of China wasn’t all gravy. Caixin’s manufacturing PMI fell to 51.5 vs. 51.8 in November