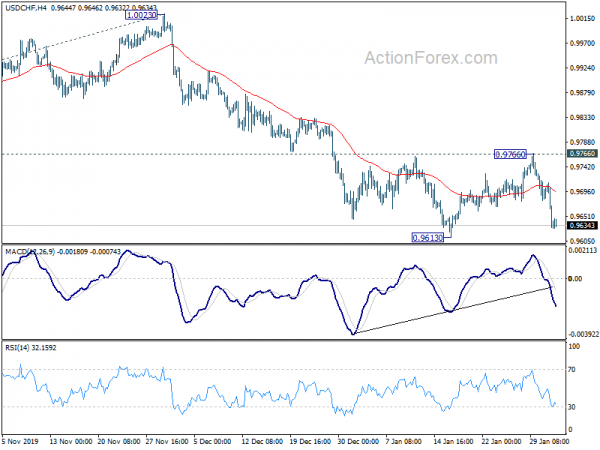 Risk aversion continues in Asian session as China’s coronavirus outbreak continues to worsen. The Shanghai SSE is currently down -8.13%, catching up with others as it’s back from holiday. Nikkei is down -1.10%. Singapore Strait Times is down -1.07%. Though, Hong Kong HSI is up 0.09%.

The currency markets, are relatively quiet, however, as major pairs are crosses are staying inside Friday’s range. Australian and New Zealand Dollars are mildly firmer while Sterling and Yen are softer. But the picture could drastically chance as the day goes on.

Technically, USD/CHF is heading to 0.9613 support and break will resume whole down trend from 1.0237. EUR/CHF might follow through 1.0665 temporary low. However, for now, we’d expect strong support from 1.0629 key support level to contain downside. EUR/CHF’s reaction to 1.0629 would decide whether EUR/USD’s rebound 1.0992 could sustain.

According to China’s National Health Commission, as of end of February 2, total number of confirmed coronavirus case rose to 17205, with 2296 serious cases. Death tolls rose to 361. Suspected cases rose to 21558. Number of tracked people rose to 189583.

Globally, at least 171 cases were reported in Australia, Britain, France, Germany, Hong Kong, Japan, Russia, Spain, Thailand, Taiwan the United States and 13 other countries. Person-to-person transmission was reported in the US, Germany, Japan, Thailand, Vietnam and South Korea. The Philippines reported the first death outside of China on Sunday.

PBoC unexpectedly lowered interest rates today in response to the crisis in the country. Seven-day reverse repo rate was cut from 2.50% to 2.40%. 14 day tenor was cut from 2.65% to 2.55%. The central bank also injected CNY 1.2T case into the money markets through reverse bond repurchase agreements.

China Caixin PMI Manufacturing dropped to 51.1 in January, down form 51.5, missed expectation of 51.3. Production and new work both expanded at softer rates. Employment fell for the first time in three months. Though, business confidence improved as trade tensions eased.

Zhengsheng Zhong, Chairman and Chief Economist at CEBM Group said: “”China’s manufacturing economy recovered at a slower pace at the start of the year. Although corporate confidence was boosted by the trade deal, some manufacturers did not replenish stocks despite the pickup in production, due to limited improvement in domestic and foreign demand. Pressure from rising raw material costs is worth attention. In the near term, China’s economy will also be impacted by the new pneumonia epidemic, and therefore need to gain support from proper countercyclical policies.”

Japan PMI Manufacturing was finalized at 48.8 in January, a slight increase from December’s 48.4. But contracted has continued since last May. Output and new orders recorded further declines. Export demand dipped, but downturn shows signs of easing. On the positive side, business confidence hits highest level since August 2018.

Joe Hayes, Economist at IHS Markit, said: “Manufacturing PMI data for Japan are still portraying a struggling industry, causing firms to cut back production for another month due to subdued demand and global uncertainties. “Scratching beneath the surface and we find that the capital goods sector was a particular straggler, with data here showing sharp and accelerated reductions in production and new orders. Falling demand for capital goods does not bode well for the global economic outlook, nor for Japanese exports.”

Australia AiG Performance of Manufacturing Index dropped to 45.4 in January, down from 48.3. That’s the lowest reading since 2015 and suggested faster contraction in the sector. AiG said, “January is traditionally the slowest month for Australian manufacturing, but the start to 2020 was even slower than usual. All manufacturing sectors reported weaker conditions in January compared to December and only the food & beverage sector reported expanding conditions.”