The USD weakened yesterday, against a number of other currencies, as the market is in expectation of the initial jobless claims figure for the past week. Estimations run high and forecasts vary significantly as the coronavirus outbreak worsens in the US, businesses close and workers are laid off. Analysts tend to note that bad numbers are already priced in by the market to a certain degree, yet the actual figures could be even worse. Should there be a substantial surprise in store for the markets, we may see volatility being very high as the news may prove to be difficult to digest. The severe measures which are increasingly being deployed in the US and limit personal movement, could increase unemployment substantially and are expected to cause possibly a global recession. As the coronavirus outbreak has not reached its peak in the US and restrictions could intensify, we expect labour data to worsen on a weekly basis over the next months and today’s release could only signal the start. Also please note that the 2 trillion stimulus package as analysed yesterday, was approved by the Senate and is now being passed to the House of Representatives for approval. Should it be approved today by the House, it would move on to President Trump in order to sign it into law. EUR/USD continued to rise yesterday breaking consecutively the 1.0815 (S2) and the 1.0890 (S1) resistance lines, now turned to support. We maintain a bullish outlook for the pair as it remains above the upward trendline incepted since Monday the 23rd of the month. Should the bulls maintain in control over the pair’s direction, we could see it breaking the 1.0955 (R1) line and aim for the 1.1010 (R2) level. Should the bears take over, we could see the pair breaking the 1.0890 (S1) line and aim for the 1.0815 (S2) support level.

Today during the late European session, we get BoE’s interest rate decision and the bank is expected to remain on hold at 0.10% as the bank proceeded with rate cuts twice in March, the rate is already at historic lows and the bank had expressed an unwillingness to enter the negative area. Please note that currently GBP OIS imply a 92.57% probability for the bank to remain on hold as expected. We expect that the bank may expand its QE or lending programs in order to support the UK economy, as the UK government seems to be running on a budget deficit, while at the same time the current account deficit is substantial. We expect that the extend of the expansion in the bank’s QE program could be the key to the market’s reaction. Should BoE follow the Fed’s footsteps, announcing a possibly open-ended QE, we could see the pound starting to weaken. Also note that GBP weakened yesterday as worries about the coronavirus outbreak effects in the UK intensify, with analysts intensifying their bearish outlooks after cable’s short rally the previous days. Cable despite considerable volatility, landed where it had started the prior day, just below the 1.1880 (R1) resistance line. We could see the pair maintaining this sideways motion albeit financial releases from the US as well as BoE’s interest rate decision could change its direction. Should cable’s long positions be favored by the market, we could see it breaking the 1.1880 (R1) line and aim for the 1.2015 (R2) level. Should the pair come under the selling interest of the market we could see it breaking the 1.1715 (S1) line and aim for the 1.1570 (S2) level.

Today during the European session, we get Germany’s GfK consumer sentiment indicator for April, UK’s retail sales growth rates for February, while later on we get BoE’s interest rate decision and at the same time CNB’s interest rate decision. A bit later from the US we get the final GDP growth rate for Q4, albeit it could be overshadowed by the simultaneous release of the initial jobless claims figure. During, tomorrow’s Asian session please note that Tokyo’s inflation rates for March are due out. 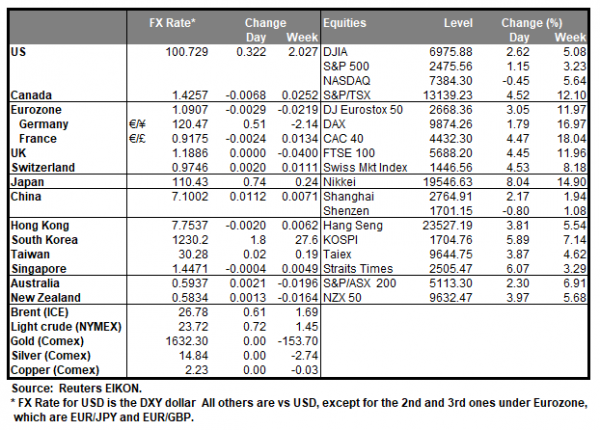