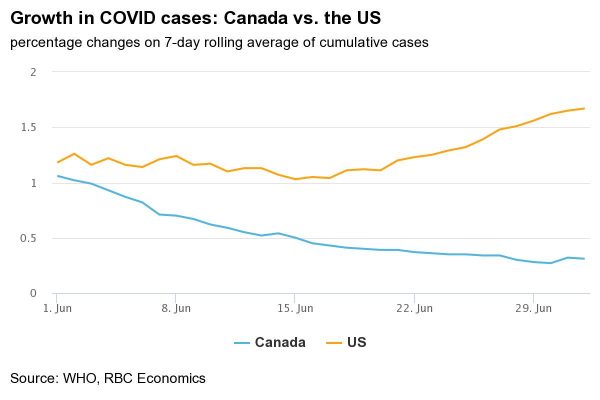 Expect another job gain in next week’s Canadian employment report – the latest green shoot to peek through the gloom in the early days of this recovery. We’re expecting a rise of 650k jobs, a little more than twice the 290K increase in May. That should be enough to push the unemployment rate a tick lower, despite a bounce-back in labour force participation. And growth in hours worked should outpace employment growth after underperforming during the March/April downturn. That increase should reinforce expectations that the economy grew once again in June.

Nevertheless, the economic recovery is not expected to be quick, or indeed complete until there is a vaccine and/or more effective treatment widely available. The increase in employment in Canada we expect would still leave the job count down over 2 million from February.

Indeed, south of the border, economic data has also improved more quickly than expected – including a 4.8 million increase in jobs reported in June. But the resurgence of COVID-19 cases and hospitalizations across a number of states has taken some of the shine off these indicators and prompted some roll-backs of already-eased containment measures.

In Canada (as in most developed economies), the virus appears to have been more effectively contained, with case counts falling throughout June. But the resurgence in the US is still a clear reminder that there are limits to the extent activity can return to ‘normal’ without stoking another wave of infections.

That in mind, this week Statistics Canada estimated May output increased 3% compared to an unprecedented 18% decline in GDP over March and April – capping the latest economic downturn at 2 months. Retail sales jumped a reported 19% in May, similar to the improvement implied by our own consumer spending tracker . Home resales increased sharply in May, albeit from exceptionally low levels in April. Auto sales more than tripled their April totals in June according to industry reports (although were also still down from a year ago.)