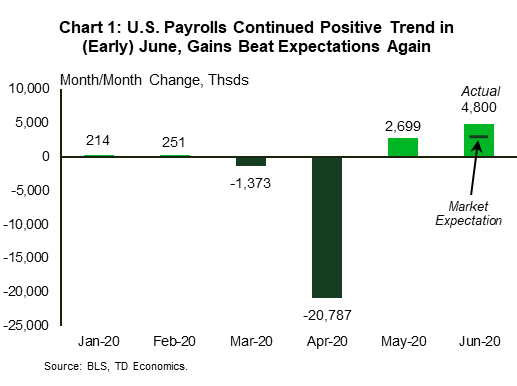 A string of broadly positive data releases this week helped reinforce the theme of an economic recovery taking shape at the end of the second quarter. With the data at hand and some encouraging signs regarding the development of a vaccine, financial markets appeared to look past the recent surge in new infections, with equity markets gaining on the week.

On the data front, the payroll report confirmed that the labor market recovery continued in early June (survey period ran through June 12th). The U.S. gained another 4.8 million jobs – much better than market expectations (Chart 1). Gains were widespread across industries, though the badly-bruised leisure & hospitality sector continued to account for an outsized potion of gains (+2.1 million).

As more workers were called back to their jobs, the number of unemployed workers fell by 3.2 million to 17.8 million. Meanwhile, the unemployment rate headed lower, falling from 13.3% in May to 11.1%. Even adjusting for potential misclassification, the unemployment rate fell to an estimated 12.3% (from 16.4% previously). One fly in the ointment was a rise in the share of unemployed workers on permanent layoff, which rose from 10.9% in May to 16.2% in June. This suggests that the health crisis will indeed have some longer-lasting scars.

An improved labor market backdrop and some progress on the reopening the economy (earlier in the month) helped prop up consumer confidence, with the Conference Board’s sentiment measure rising more than expected in June. With low interest rates an added tailwind, the purchase of big-ticket items picked up. Home buyers were busy inking deals in May, with pending home sales surging a record 44.3% on the month. Contract signings tend to lead closed sales by 1-2 months, signaling a strong near-term showing in the latter in the months ahead. Meanwhile, vehicle sales continued to rebound in June – up nearly 6% in June to 13.1 million – albeit at a slower pace than the month prior.

With the U.S. economy beginning to fire on more cylinders, the factory sector also showed signs of improved activity. Propped up by sharp gains in the ‘new orders, production and employment’ subcomponents, the ISM manufacturing index swung back into expansionary territory in June for the first time since February.

While recent economic data has continued to come in broadly positive, the virus is still a major wildcard. The improvement outlined in the employment survey, for instance, came before recent surge in new infections (Chart 2). The latter has led many states to either reverse or slow their reopening plans. A more measured reopening path will weigh on jobs and spending, among other things, ultimately