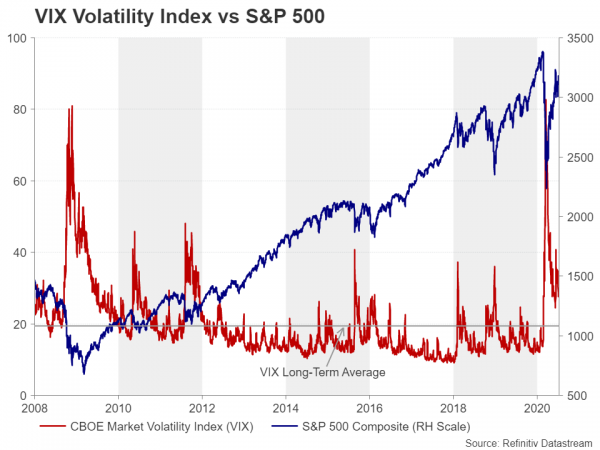 The resurgence in coronavirus cases appears to have put a pause on the relentless risk rally that has propelled global stocks to recoup almost 80% of the March crash. But as stocks drift sideways while investors re-evaluate the prospect of a V-shaped recovery, the bulls still seem to have the upper hand. A resumption of the uptrend looks like a stronger possibility than a downside correction judging by the market sentiment and technical indicators. However, the markets’ two best barometers for risk and uncertainty tell a different story. The safe-haven gold continues to ascend to fresh multi-year highs but equally as important, the closely watched VIX volatility index has yet to subside to pre-pandemic levels, suggesting that traders do not think the turbulence is fully behind them.VIX signalling crisis is far from over

The VIX volatility index – a measure of market expectations of volatility for the S&P 500 over the next 30 days – surged to the highest since the 2008/09 financial crisis in March, peaking at 85.47, as the Covid-19 outbreak went global. It has since fallen back to less worrisome levels, though at around 29, it is still well above the 12-region it was hovering around in January. The VIX – often viewed as a ‘fear gauge’ for wider market uncertainty – has a predictably strong negative correlation with the S&P 500 but a surprisingly weak positive relationship with gold.

The traditional haven gold had started to rally long before the pandemic as the US-China trade war and other geopolitical risks had spurred a flight to safety for much of 2019. But geopolitical risks and broader sentiment are not the only factors that drive the precious metal. Gold is negatively correlated to the US currency and US yields and tends to rise when the dollar falls as it becomes cheaper for investors in non-dollar denominated countries to purchase the bullion.

The strongest demonstration of this relationship came at the height of the virus turmoil in March when gold plunged along with stocks, as the dollar soared during the ‘dash for cash’ episode. But as the liquidity constraints eased, gold is back to its predictable behaviour – climbing fresh highs amid a period of exceptionally heightened uncertainty. Prices are currently nearing a nine-year peak, shooting above the $1,800/oz level as the number of virus cases continue to escalate in many parts of the world, including the US, which has seen many states re-impose some lockdown restrictions.

However, things have been a lot ‘calmer’ in equity markets, with most major stock indices consolidating rather than handing back their exorbitant gains. The shift in investors’ mood from a stimulus-induced euphoria to a merely more cautious one as opposed to a return to the state of panic can also be seen in the VIX index, which has reacted very mildly to the resurgence of infections in the US.

Is Fed stimulus distorting the VIX too?

Yet the index remains above non-crisis levels and the significance of it not having fallen further is even greater when considering the distortion generated by the extraordinary amount of stimulus the Federal Reserve has pumped into the American financial system. Financial crisis-era quantitative easing (QE) was widely blamed for the unusually low volatility in the markets for extended durations over the past decade even as the world grappled with the Eurozone debt crisis, Brexit and trade wars.

But those previous stimulus efforts are now dwarfed by the unprecedented amount of intervention central banks around the world have made in financial markets since the pandemic erupted. The flood of liquidity has inflated expectations of a V-shaped recovery, despite blunt warnings by policymakers about the huge degree of uncertainty about the outlook. Taking this ‘distortion’ into account, investors should be more alarmed about why the VIX has not pulled back to more comfortable levels around its long-term average just above 19.

As Wall Street bulls show no sign of running out of steam, there is growing talk of a bubble waiting to pop, particularly for the tech-heavy Nasdaq, which has not only fully recovered all of its March losses, but is scaling record highs. If the elevated VIX index and bullion prices aren’t enough to ward off traders from excessive risk taking, then what is?

But is the equities boom really that irrational? The biggest gainers in this rally have been big tech names like Facebook, Amazon, Microsoft and Netflix, all of which have benefited from their online presence during the lockdowns and are likely to continue growing in revenue even if the pandemic lasts several year