Weekly Economic and Financial Commentary: Can the Economic Rebound Outrun the Rise in COVID-19? 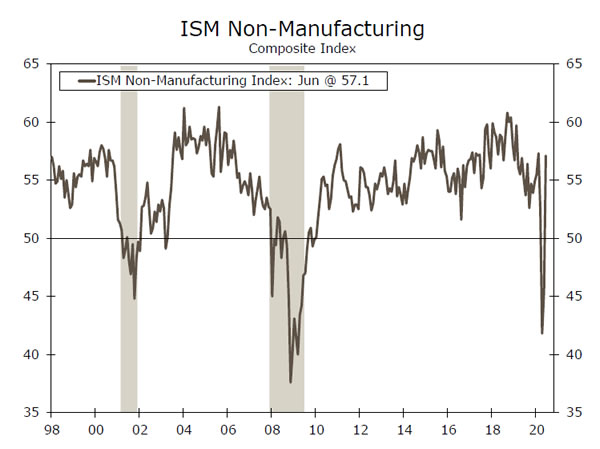 With Little Economic News, Investors Focus on the Virus

Can the Economic Rebound Outrun the Rise in COVID-19?

With little substantive economic news reported this week, the resurgence in COVID-19 infections has re-taken center stage. What news was reported was generally favorable. The revival in economic growth that began in late April appears to be continuing and diffusion indexes, like the ISM, continue to surprise to the upside because a broader set of industries and regions are opening back up. The ISM index measures the breadth of strength or weakness in the economy but does not provide much insight into the magnitude of the improvement. The details of the non-manufacturing survey this week were positive, however, with business activity jumping 25 points to 66 and the new orders series bouncing nearly 20 points to 61.6.

The other major surprise this week was the incessant decline in bond yields. Yields fell further following the release of the surprising drop in the producer price index (PPI). The PPI has not received much attention since it was reformulated a few years ago, the index has generally not been a good guide to future inflation trends. That said, financial markets were poised for an increase this morning, reflecting the earlier rebound in energy prices and some rebound in industrial commodity prices. The drop has sent a whiff of deflation fears through markets, which had already been on edge due to the resurgence in COVID-19 cases and fears that the U.S. economy, or major states, could see renewed shutdowns.

Lower bond yields have been a godsend for the housing industry, which remains one of the few bright spots in the economy. Mortgage applications for the purchase of a home jumped 5.3% in the week ended July 3 and are running 33.2% ahead of their year-ago level. The strength in mortgage applications is good news for home sales, particularly the existing home market. Sales of existing homes slumped in April and May, because home showings were forb