China Could Return to Growth in Q2 amid Geopolitical Bullying Woes 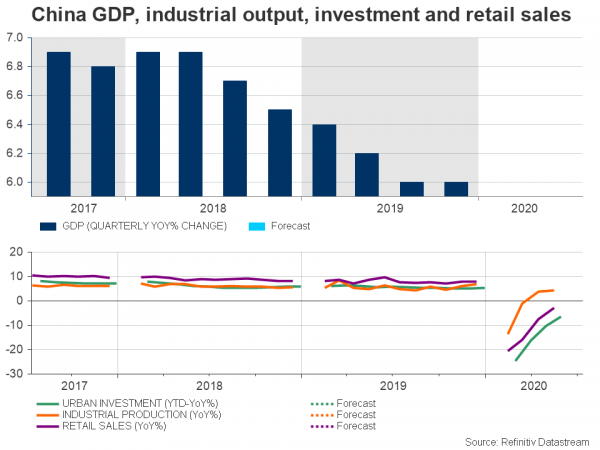 China releases GDP readings for the second quarter on Thursday at 02:00 GMT along with industrial production for June, retail sales and fixed investment data. All figures are forecast to strengthen, indicating that the world’s second largest economy is recovering albeit gradually after contracting at a record rate. The data could boost risk sentiment, though China’s cloudy political background could be a reason for traders to adopt a wait-and-see approach.China could grow by 2.5% y/y in Q2

China’s GDP slumped by 6.8% y/y and 9.8% q/q in the first three months of the year when Covid-19 was first discovered in Hubei’s province Wuhan, forcing Beijing and the global economy thereafter to lock their economies. The strict measures, however, proved to be effective, and the government was the first worldwide to gradually revive business activities in March, also providing significant monetary and fiscal support to re-boost the economy.

In the second quarter, the country experienced a slight resurgence in new virus cases. However, unlike the US, the second outbreak appeared more contained and the resumption of some restrictions were less painful, allowing the economy to regain some strength. According to forecasts, China’s GDP bounced back into the positive territory, growing by 9.6% q/q and 2.5% y/y in Q2.

Separately, monthly data for June are expected to show that retail sales and industrial production extended their recovery, with the former rising by 0.3% m/m after tumbling by 2.8% in May and the latter expanding slightly faster by 4.7% versus the 4.4% increase previously. Urban investment will be closely watched too after China allowed local governments to issue special bonds worth 3.75 trillion yuan to fund infrastructure projects. Analysts project the measure to have halved last month’s decline, from -6.3 to -3.3%.

On the one hand, stronger data could echo that the country is headed for greater prosperity, as the Chinese media stated last week, triggering a crazy rally in stock markets. On the other hand, political conditions inside and outside the economy remain cloudy and could weigh on risk-sensitive markets for some time. What the world would not like to face during the current virus situation is the resurfacing of geopolitical tensions. But the US and China have only managed to toughen their tone so far and exchange threats, signalling that things may get worse before getting better. Particularly, conflicts have worryingly expanded on several fronts, from trade to questions regarding who is to blame for the Covid-19 spread to Hong Kong’s security law and, most recently, to territorial disputes over the South China sea. And the bullying wind against China keeps blowing as the UK decided earlier this week to ban telecom companies who buy new Huawei 5G equipment after the end of this year and asked those companies to remove the firm’s Chinese 5G kit from their networks by 2027. Australia is also among countries to oppose Hong Kong’s security law, while China-India relations is another open question after a violent clash in the disputed border in the Himalayas.

Aussie could welcome positive data, but some caution should be warranted

Markets could welcome encouraging data releases, especially if the results beat expectations. Recall that China’s export and import figures arrived stronger-than-expected on Tuesday, hence upside surprises cannot be ruled out. Even so, geopolitical disputes in the middle of a pandemic with an uncertain trajectory could only result in more uncertainty, although the impact on markets has been muted so far. Hence, assets which are sensitive to Chinese news, such as the Australian dollar, may cheer on upbeat readings, though gains may not be sustainable.

Against the US dollar, the aussie has been trading sideways since the beginning of June, unable to pick up steam above 0.7000.  Should GDP figures send the price above that ceiling, the bulls could pause around the 0.7080 barrier before meeting the 0.7200 mark.

To the downside, the 20-day simple moving average (SMA) could support the price if the readings disappoint. If not, the selling pressure could extend towards 0.6790, a break of which could see the retest of the 0.6670 level.