All Eyes on the EUR/USD 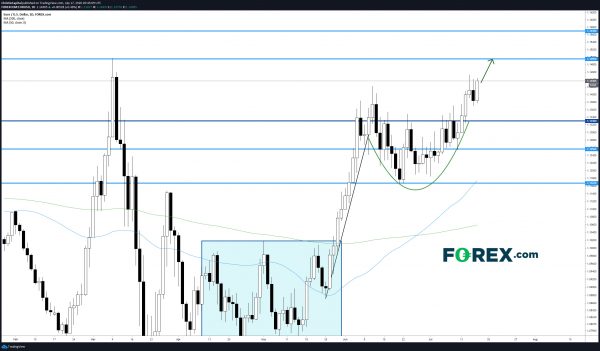 The US Dollar was bearish against most of its major pairs on Friday with the exception of the CAD.

On the economic data front, Housing Starts rose to 1,186K on month in June (1,190K expected), from a revised 1,011K in May. The University of Michigan’s Consumer Sentiment Index unexpectedly fell to 73.2 on month in the July preliminary reading (79.0 expected), from 78.1 in the June final reading.

The Euro was bullish against most of its major pairs with the exception of the CHF. In Europe, the European Commission has posted final readings of June CPI at +0.3% on year, as expected.

The Australian dollar was bullish against most of its major pairs with the exception of the CHF.

Looking at active currency pairs, the EUR/USD had the largest move in Friday’s New York trading session jumping 51 pips to 1.1435. On a daily chart, the EUR/USD remains in play. Traders are looking towards a test of the March high around 1.1495 for a possible breakout towards 1.157 resistance set back in Jan of 2019.