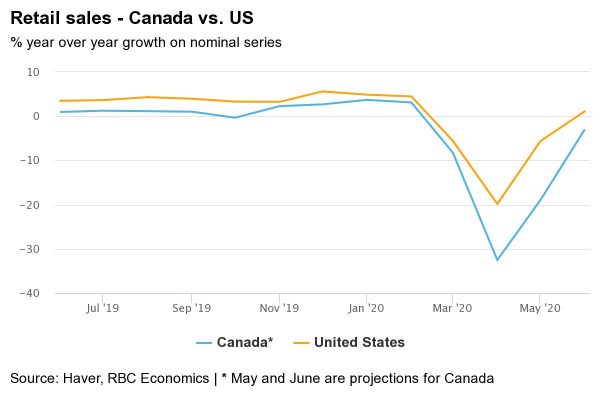 The bounce-back in household spending to-date continues to look significantly stronger than expected. Canadian home resales jumped 15% above year ago levels in June — a far cry from the 57% year-over-year plunge in April when a full month of virus containment measures pushed both buyers and sellers to the sidelines. Home price growth also held up better than feared through June. And new residential building activity would hardly have shown a blip this year had it not been for a mandated shutdown in residential construction in Quebec in April.

We expect the upcoming May retail sales report to show more of the same vigour, with a 20% rebound in spending – in line with the 19% preliminary estimate from Statistics Canada. An impressive showing – but still only enough to bring sales back to around 80% of what they were before COVID-19 prompted an unprecedented collapse in March and April.

Still, our own tracking of credit card expenditures point to a similar-sized rise in June. Indeed, it’s possible that retail sales were close-to or above year-ago levels in June – as was the case in already-reported numbers in the United States and the United Kingdom.

Retail sales will likely join a list of economic indicators that have recovered better-than-expected compared to our prior expectations in May, including manufacturing and wholesale sales from the past week. That’s leaving the data tracking some upside risk to the May GDP release to come the week after next, relative to Statistics Canada’s prelim estimate of 3% gain.

Still, the rebound in Canadian household spending near-term is also not so surprising considering the exceptionally large boost to household incomes coming from programs like the CERB. Household incomes in Q2 likely increased – potentially by a substantial amount – despite exceptional labour market weakness in the quarter.

Interest rates are also exceptionally low and programs like bank payment deferrals have eased near-term expenses. Nevertheless, there remains a significant risk that labour market weakness will last longer than those policy offsets, dragging down household disposable incomes and spending down the line. And although spending on merchandise has bounced back more quickly than expected, spending on services, like accommodation, restaurants, and travel, are still sharply depressed from pre-COVID levels.

Looming over all of this is the ongoing threat of COVID-19. The resurgence of the virus in parts of the United States is a stark reminder that there are risks to returning life to ‘normal’ too quickly and labour markets in Canada remain exceptionally soft even with recent improvements . So even though the initial revival in growth was stronger than anticipated, we continue to expect activity will still be significantly depressed at the end of this year – with GDP about 5% below year-ago levels in both Canada and the United States at that time.

The prospect that further improvements in the economic backdrop will be harder to come by going forward had the Bank of Canada still firmly focused on downside risks to inflation. A rebound in oil prices into June significantly increased prices at the pump compared to May, and was probably enough to push headline CPI back into positive territory (+0.3% year-over-year) after falling below zero in April and May. But ex-food & energy prices growth looks more likely to edge down from the already subdued 0.6% year-over-year increase in May, and we are assuming the Bank of Canada’s preferred median, trim, and common CPI indexes will be little-changed after slipping lower the prior months.

Households can be forgiven for feeling like inflation is higher than the headline CPI numbers would suggest – buying patterns have changed during the pandemic, and spending on food from stores (which has seen price growth pick up significantly) is taking up a larger share of household purchasing. A new analytical price index from Statistics Canada that controls for changes in household purchasing trends did indeed show less downward pressure on price growth in recent months – the all-items series remained flat in April compared to a year ago and declined 0.1% in May in comparison to 0.2% and 0.4% declines in headline CPI for the same months. But those adjusted trends were still soft enough for the central bank to feel comfortable signalling that interest rates will remain exceptionally low for the foreseeable future.