Weekly Economic and Financial Commentary: A Glimpse of the Rebound that Might Have Been 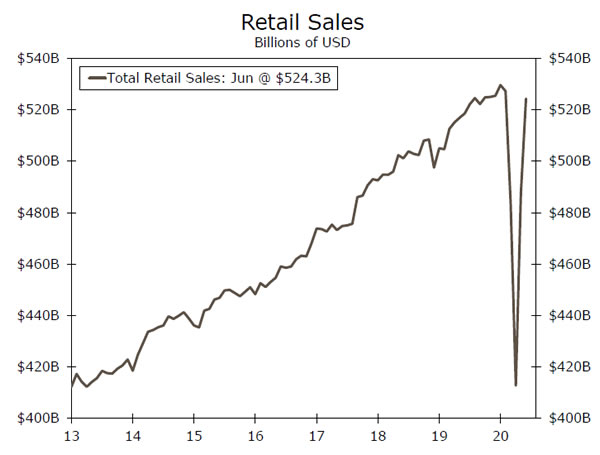 A Glimpse of the Rebound that Might Have Been

Just When Small Business Confidence Was Coming Back

The NFIB Small Business Optimism Index jumped 6.2 points to 100.6 in June, as business re-openings bolstered expectations and hiring. The rebound in Small Business Optimism is heartening, but we fear it may be a bit premature. The survey likely came too early to reflect the sustained rise in new COVID-19 cases, which have now elicited a new round of shutdowns.

The daily increase in new cases reported in the United States on Thursday was a record 78,389. While part of the increase may be a function of increased testing, the positivity rate was 8.5%, up from 4.3% earlier in June. So it is partly increased testing but almost twice as many people that are getting tested are walking away with a positive diagnosis.

A Sharp Turnaround Was Never in the Cards for IP

As more of the nation’s factories re-opened in June, manufacturing production grew 7.2%. Auto & parts production posted another significant bounce (up 105%), as consumers began to return to dealer lots. However, the rebound extended more broadly beyond the auto sector compared to May, with production in every major manufacturing industry up in June. Despite that, manufacturing output is still down 11% since January.

Overall industrial production (IP) rose a more modest 5.4%, as low oil prices continue to weigh on energy extraction. Mining, which accounts for about 15% of IP, fell 2.9%. That rate of decline, however, is smaller than May, as demand for oil and therefore prices have firmed up a bit as the economy has re-opened.

The June retail sales report was much better than expected. The 7.5% surge in June handily exceeded expectations and lifts the overall level of retail sales to within striking distance of its prerecession peak. Clothing stores (+105.1%), auto sales (+8.2%) and restaurants (+20.0%) accounted for most of the gain. Sporting goods stores added another 26.5% in June lifting this category to a level that is more than 20% above its pre-recession peak.

The June report leaves total retail sales just 1.0% off its pre-virus peak, and control group 1.4% above its peak. Were it not for the virus rebound, retail sales would be poised for a full recovery.

This report could be the best example this week of the recovery that might have been. That is not to say that sales are doomed to fall, but it is fair to say the rebound could be fleeting as the country struggles with a reacceleration in case growth that might force new closures. The months ahead may not be so smooth for the retail outlook. While May and June figures benefited from low-base effects as well as a gradual loosening of stay-at-home orders in many parts of the country, July will not have the same wind in its sails. Th