What We Know About the US Election So Far 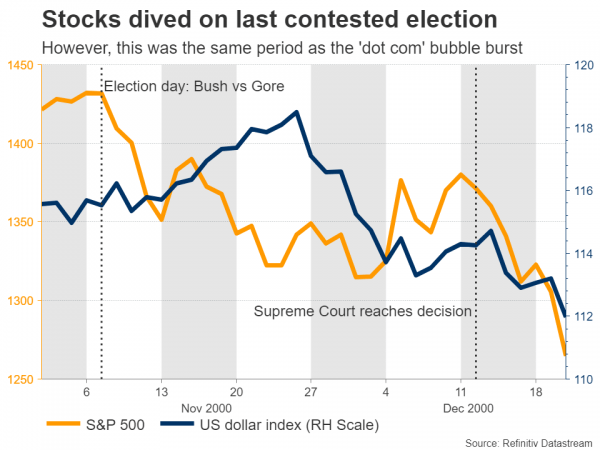 Votes continue to be counted in the US and the outcome hangs on a knife’s edge. It is so close that the next President will be decided by Michigan and Pennsylvania, where Donald Trump is currently leading, though that could change as more mail-in ballots are tallied. What seems clearer though is that the Republicans could keep the Senate, which diminishes the odds of a huge stimulus package. This argues for a mild boost in the dollar and some pain in equities, though the overall trend may depend mostly on who is victorious, with a Biden presidency but a Republican Senate being the ultimate risk.

There is a feeling of Deja vu in the air as President Trump may be on the verge of pulling off another upset victory, proving the pollsters dead wrong again. As things stand, Trump is leading in key states such as Georgia, Michigan, Pennsylvania, and North Carolina. If he manages to win all four, he will have enough votes in the Electoral College to keep the White House.

However, this could easily change. Mailed ballots will continue to be counted in the next hours and days, which allows Biden scope for a heroic comeback as mail-in votes tend to favor the Democrats. Betting markets are siding with this scenario, with the implied chances that Biden wins the presidency jumping back to 77% currently, after sinking as low as 30% earlier.

The picture is a little clearer in the Senate, where the Democrats seem to have failed to wrestle back control. Republicans still hold a 53-47 majority with the races that have been called so far, and while it is still possible that this changes, it is quite unlikely. The Democrats are projected to retain the House of Representatives, so Congress will most likely remain divided.

What does this mean for markets?

In a nutshell, smaller stimulus packages. The whole notion of massive relief packages was based on the assumption of a landslide Biden victory. Since that hasn’t transpired, any package will now have to pass through a Republican-controlled Senate, which will most likely limit its size and scope.

In isolation, this is a negative catalyst for equity markets but a positive one for the dollar, as government deficits may not spiral out of control entirely.

It could get worse

Funnily enough, this setup also opens the door for one of the worst-case market scenarios. If Biden manages to win the presidency as late votes are tallied and the Republicans keep the Senate, not only would we have political gridlock, but Donald Trump could also dispute the election result in the Supreme Court. 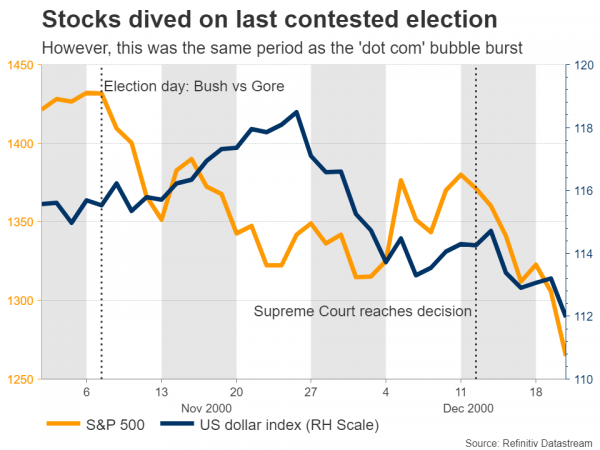 He already suggested as much in his latest press conference, and if he loses by a narrow margin, he might very well initiate the mother of all legal battles. That would imply several more weeks of uncertainty and perhaps a serious wave of risk aversion. Admittedly, he would have nothing left to lose at that point, so this is a realistic scenario.

In this event, equities could face more hardship in the near term, while the dollar might gain as investors seek defensive assets. That being said, these reactions could reverse before long as the Fed would be expected to do much more and for longer to support the economy on its own, now that the prospect of swift and powerful fiscal stimulus has diminished.

Is a Trump victory now the best-case market scenario?

Possibly. If Trump is ultimately victorious, the scenario of a brutal and drawn-out legal battle would at least be off the table. Additionally, the odds for fiscal stimulus may be better in a Republican Senate with Trump in charge, as he could pressure some lawmakers in his own party to deliver something to heal the economy.

In other words, Senate Republicans are much more likely to block stimulus proposals if they come from President Biden, instead of President Trump. Hence, a Trump victory may now be viewed as a positive development by investors, as it would simply mean that the status quo continues, and doesn’t worsen.

Beyond the election: Bigger forces still at work

The markets are fixated on the election for now, but in the grand scheme of things, there are bigger forces still at play. The virus is still rampaging through Europe and America, which will likely dampen economic activity in this quarter and beyond, forcing the Fed and the ECB to keep their feet on the accelerator. 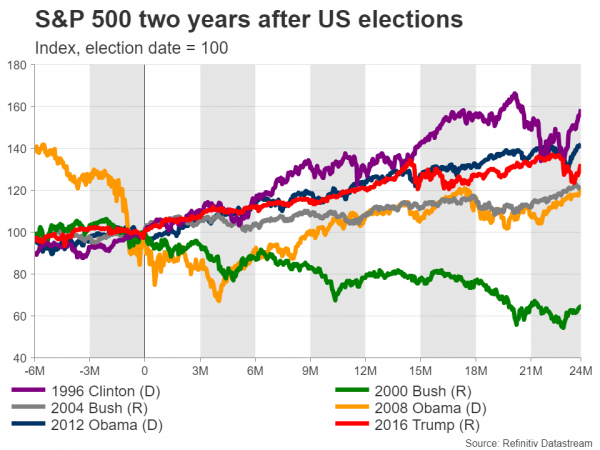 Loose-money policies have proved to be a powerful anti-virus drug for the markets this year, and if a vaccine is also successful in the coming months, any election-related wobbles may be forgotten before long.