The Weekly Bottom Line: What a Year this Week Has Been 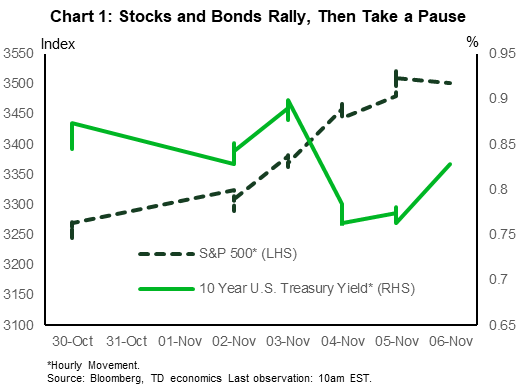 U.S. – What a Year this Week Has Been

The week has been eventful enough to fill books. Limited to one page, let’s jump right into the presidential election where no winner has yet been announced. Friday morning, Biden took the lead in Georgia and Pennsylvania. Wins in these states would put him over the edge though legal challenges appear likely to leave a cloud of uncertainty over the outcome. Meanwhile, both of Georgia’s Senate races appear be heading to runoffs, making the Republican Senate majority less certain. What is certain is that Democrats retained control of the House with a smaller majority.

With the balance of power see-sawing away from a “blue-wave” outcome, U.S. equity and Treasury markets have also been volatile. Both markets took off on the morning after the election day, seemingly pricing in less fiscal support but also a lower probability of tax increases. The S&P 500 gained 6%, while 10-year Treasuries declined by almost 13 basis points. However, Friday morning markets retraced slightly as uncertainty about the outcome in the Senate increased (Chart 1).

The biggest question on investors minds with respect to government policy is the size and scope of the next fiscal support package. Assuming a Biden win and Republican Senate, the package is likely to be smaller than the roughly $2.5 million CARES act. Still, it is likely to reinstate enhanced unemployment insurance, authorize new funds for small business and provide sector-specific support. On international trade, a Biden victory is likely to mean a more conciliatory approach with America’s traditional allies but a continued assertive stance on China.

For his part, Federal Reserve Chairman Powell, made a point of not talking about the election though he could not avoid some mention of fiscal policy. On Thursday, the FOMC left policy unchanged and made very little changes to its policy statement. As in September, it emphasized downside risks, namely the increase in covid-19 infections across the U.S. In his press conference, Powell reiterated statements he has made many times in the past about the need for fiscal policy, noting that monetary policy can only go so far in dealing with the pandemic-induced shock to household and business income. In the meantime, the Fed will not let off the monetary policy gas pedal until the recovery is much more firmly entrenched.

Amidst everything else, the week was also heavy on economic data, with Friday’s job report the main highlight. October nonfarm payrolls showed another month of solid gains, rising 638,000. The improvement in the unemployment rate was even more impressive, falling a full percentage point to 6.9% from 7.9%. Just as encouraging, the report showed a rebound in the labor force participation rate and decline in the permanent job losses. Permanent job losses have been rising in the past several months, flashing warning signs of employment fragility, so an improvement on this front is welcome (Chart 2).

Still, while ongoing progress is welcome it does not negate the need for additional fiscal support, especially as virus cases continue to rise and activity in high-contact areas to be scaled back. We hope to get more clarity on what the stimulus package may look like in the upcoming weeks.

It was an eventful week, with the historic Presidential election captivating people’s attention on both sides of the border. Uncertainty with respect to the next White House occupant still remains. Control of the Senate is also uncertain, but looks to remain Republican pending a likely runoff election in Georgia in January. This would maintain the status quo of divided Congress, reducing the likelihood of major policy changes. Financial markets have responded positively to the news with global equity indexes rebounding from steep losses last week. As of writing, the S&P-TSX was up 5.5% over last week’s close. Crude oil prices also advanced despite mounting coronavirus cases and renewed restrictions in a number of countries.

New cases and hospitalizations are still on the rise in Canada. Cases in Quebec have stabilized at a high level, but they continue to rise in Ontario, British Columbia and the Prairies. Nonetheless, this week, the government of Ontario announced a new tiered covid response framework and will be easing restrictions on businesses in the coming days.
The Canadian housing market, at least, appears to be immune to the second wave. Data on home sales in Toronto and Vancouver point to another strong month in October. While activity has cooled from its record level in the third quarter, sales of single-family homes remain robust, driven by the race for (more) space amid the pandemic.

The red-hot housing market, payment deferrals and rebounding economic activity have led to an acceleration in household credit growth. After contracting in April and May, household credit growth increased in each of the past four months and surged by 0.7% in September. This is nearly double the average monthly gain that took place in the two years prior to the pandemic. Despite recent gains, consumer credit balances remain 2% below year-ago levels, while mortgage credit growth has continued more or less unabated and is currently 5.7% above its year-ago level.

In other economic news, following a temporary blip in August, international trade flows resumed growth in September. Imports and exports rose by 1.5% a piece, leaving the trade deficit little changed. Despite the progress, nominal exports and imports are still down by 5.8% and 2.4% relative to their pre-crisis levels, and, like other economic indicators, momentum is fading. Renewed restrictions on activity in Canada and abroad have increased headwinds to trade and will imply a slower recovery going forward.

Slowing momentum amid rising infections was also front and center in Friday’s job report. The Canadian economy added just 84,000 jobs in October, less than a quarter of a gain in the prior month (Chart 2). As a result, the unemployment rate ticked down just 0.1 percentage points to 8.9%. These results reflect labor market conditions during the week of October 11 to 17, when several provinces reintroduced measures to restrict activity in high-contact businesses in order to slow the spread of the virus. Employment declined outright in Quebec and slowed significantly in Ontario. Gains have slowed appreciably for both older and younger Canadians.

All in all,  the leaps and bounds seen in the recovery early on are now turning into baby steps. Given rising virus case counts, a bumpy road lies ahead, with economic outcomes dependent on the path of the virus.

COVID has had positive as well as negative effects on inflation, but the net impact has been and likely will continue to be disinflationary. The October CPI data should support that view. The recent surge in used vehicle prices appears to have run its course, the trend in the health insurance component of the CPI appears to have turned down sharply, and rents are probably just starting to slow. Our forecast implies 1.2%/1.7% y/y for total/core prices, after 1.4%/1.7% in September. Those readings are down from 2.3%/2.4% in February (pre-COVID).