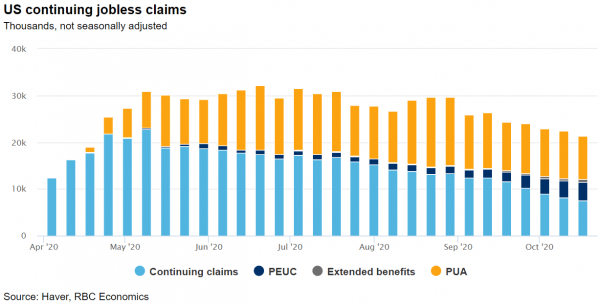 A quiet week for data releases lies ahead, leaving time to absorb the results of the US presidential election – and what increasingly looks likely to be a Biden Presidency. The outcome of the US vote matters for Canada, with a Biden win likely to mean less international trade uncertainty but more potential risks to the completion of the Keystone XL pipeline. Votes are still being counted, but should Biden prevail, his ability to push through the rest of his agenda will depend on the make-up of Congress, which looks as if it will be split, with the Republicans still favored to maintain control of the Senate.

A more pressing near-term concern for the U.S. and Canadian economic outlooks remains the risk of another round of more stringent virus containment measures. US case-counts have hit new records. Labour markets have continued to improve as governments remain very hesitant to re-impose lockdowns yet claims for jobless benefits are still at exceptionally high levels. In Canada, the release of the Canadian Survey on Business Conditions (CSBC) – collected from mid-September to mid-October – will give an early read on how well business confidence held up as the virus spread escalated into the fall. Targeted containment measures (closures of restaurants and gyms in places like the GTA, Ottawa, Montreal, and Quebec City) resulted in another step-down in employment in accommodation and food services and entertainment industries in October. Job markets have continued to improve outside those sectors – and early survey data on Canadian manufacturing (October PMI at 55.5) have stayed relatively solid. Overall hours worked increased another 0.8% in October, pointing to another increase in GDP. But the risk remains that more stringent containment measures will weigh on the economy in the final months of 2020. 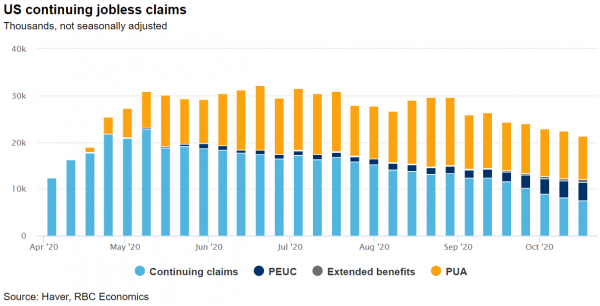 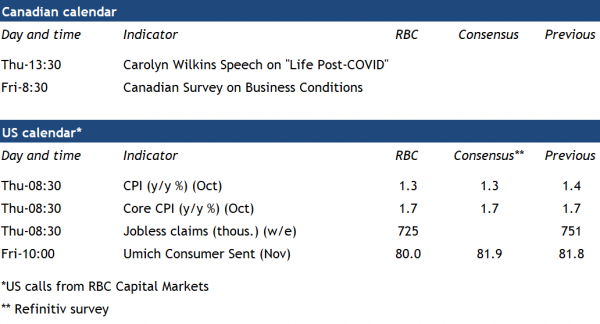