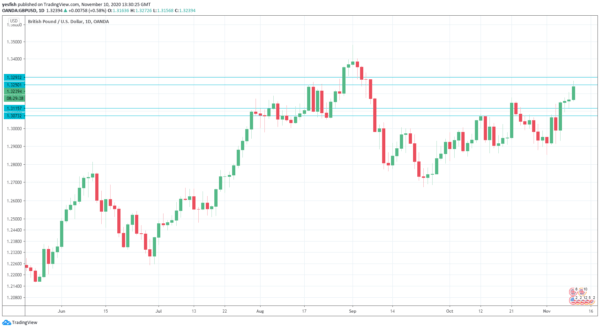 GBP/USD continues to head upwards. In the North American session, the pair is trading at 1.3233, up 0.53% on the day. The pound is now trading at its highest level since September 7th.

The UK released employment numbers on Tuesday, and the numbers were better than expected. This cheered investors, who responded with a thumbs-up as GBP/USD has punched above the 1.32 level. Wage growth climbed 1.3% in September, its first gain in five months. The forecast stood at 1.0 per cent.

There was more positive news from Claimant Count Change, which posted its first decline since May 2018. Unemployment claims fell by 29.8 thousand, as the forecast projected a gain of 36.0 thousand. The unemployment rate rose for a third straight month, climbing from 4.5% to 4.8%. This was higher than the estimate of 4.7%, but investors preferred to focus on the impressive wage growth and jobless claims numbers.

The UK and the European Union remain apart on a number of crucial issues regarding Brexit, including fishing rights and how to ensure the movement of goods between Ireland and Northern Ireland. The election of Joe Biden as President-elect is an important development in the Brexit talks, as it could soften Prime Minister Johnson’s stance towards a deal with the EU.

Johnson has been a staunch admirer of Donald Trump, who has supported the British prime minister in his battle with the EU. In the event that there is no Brexit deal, Johnson was counting on a quick trade agreement with Trump. However, a Biden administration will strongly back a Brexit deal and will be less favorable to signing a free trade agreement with the UK without a Brexit deal first. Thus, Biden’s election could pave the way for a Brexit agreement, which would be bullish for the pound. 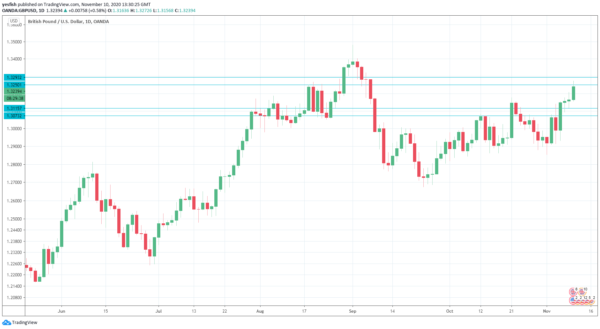