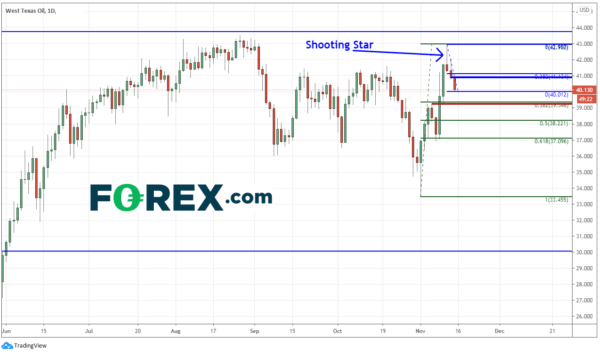 For the most part, the US Presidential Elections are behind us and markets will turn their attention to the new November 19th Brexit “deadline” for negotiators to come up with a trade deal.  Markets are hoping a deal will be in place soon in order to present it to EU leaders via their video conference on Thursday.  There was plenty of excitement early last week as pharmaceutical company Pfizer announced the results of their trials, which showed its vaccine prevents 90% of corvid infections.  They will seek US review later this month.  However, the vaccine will not be widely available until the spring.  Coronavirus daily case rates are still increasing as we approach the winter month, bringing with it more restrictions and lockdowns worldwide.

November 19th is the latest deadline for Brexit negotiations.  Although both sides say progress is being made and that conversations should continue, the lack of news is leaving many traders skeptical that a deal will get done.  The main issues to be resolved are the same issues that have been preventing a deal from the onset, primarily:

As has been all along, time is of the essence.  The last plenary session of the EU Parliament is December 14th-17th.  These are the last days for the EU to vote on a deal.  However, a deal must be reached and it  needs to be reviewed by subcommittees well before that date.  Upcoming notable dates are as follows:

However, note that if a deal isn’t reached by the end of November, the last two meetings my be focused on how to handle the no-deal Brexit, rather than how to tidy up negotiations.

In a late-day on Friday, Dominic Cummings, Boris Johnson’s right-hand man and the person who crafted Brexit, resigned.  Watch GBP pairs and FTSE to see if this will affect negotiations next week.

In addition to the Brexit saga, the UK and EU must continue to deal with the ongoing coronavirus pandemic which continues to keep countries in turmoil.  In the UK, the country continues to remain on lockdown.  However, it may be beginning to work!  Just a day after Britain became the first European country to surpass 50,000 coronavirus deaths, the R rate on Friday slowed to between 1.0 and 1.2 from between 1.1 and 1.3.  The lockdown remains in effect until December 2nd.  In the meantime, Chancellor of the Exchequer Sunak is working on a new stimulus plan as the BOE discusses yield curve control as they are said to be moving away from the notion of negative rates.

In the EU, most countries remain either in lockdown or under restrictions as it has been for nearly.  The European Council and the European Parliament have approved the 750 billion Euro Recovery Fund; however it now must be approved by all 27 European member countries.  Both Poland and Hungary are threatening to veto.

Not to take away from the severity of the situation in the EU, but the focus now turns to the US, where the CDC reported a record 194,000 new daily coronavirus cases , up from 153,000 on Thursday.  President Trump has refused to issue a national shutdown, however many states have issued their own restrictions, such as curfews, occupancy limits and virtual schooling.  In addition, 6 Northeastern State Governors will an emergency summit do discuss additional actions to limit the spread.  Joe Biden will not take the oath of office until January 20th.  Some are hoping Biden will provide more guidance from a national level in terms of restrictions and possible lockdowns th