US Retail Sales in Sight as Fed Prepares for Action 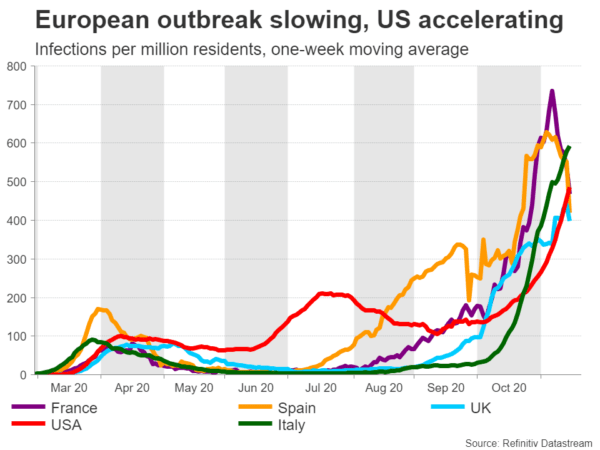 America’s latest retail sales data will hit the markets at 13:30 GMT Tuesday, and investors will look for clues on whether the Fed will pull the easing trigger again in December. With US infections spiraling out of control lately, Congress locked in a stalemate over more fiscal relief, and longer-dated US bond yields rising after the vaccine news, the Fed may frankly have no choice. As for the dollar, all this may imply some pain, but the upside in euro/dollar looks capped for now.

Economy still fine, but for how long?

Simply looking at US economic data, one could conclude the recovery is humming along nicely. The jobs market continues to heal, inflation is running at a decent clip, and consumption has bounced back in a powerful manner. What’s more, the latest PMIs suggest businesses are wildly optimistic about the future, pinning their hopes on a vaccine ending the pandemic next year and additional stimulus supporting the economy in the meantime.

Alas, everything is not rosy. US infections have exploded lately, forcing several states to impose tougher restrictions on social life so that healthcare systems are not completely overwhelmed. More states are expected to follow soon given how rapidly infections are rising, which will inevitably hit growth. 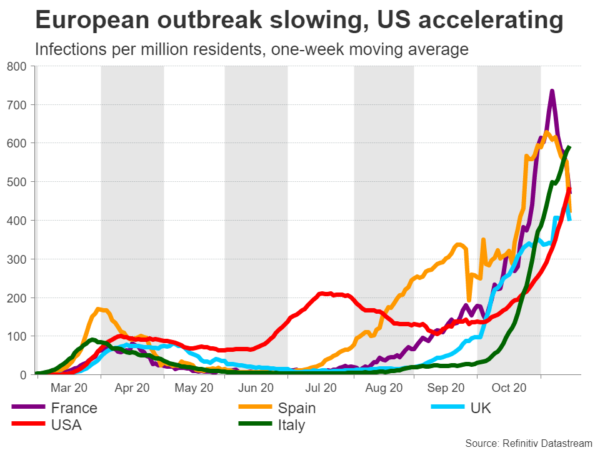 The other risk is the lack of a new round of massive fiscal stimulus now that Congress will likely stay divided. While a new package is not entirely out of the question, the Republican-controlled Senate has played down expectations for anything big. Markets have neglected this hazard, yet the Fed hasn’t, with policymakers constantly calling for more government support. A vaccine may be coming, but the economy still has to get through the winter.

In October, retail sales are projected to have risen by 0.5% on a monthly basis, much slower than the 1.9% recorded in September. The retail control group, which excludes volatile items and is used in GDP calculations, is expected to encounter a similar slowdown.

To be clear, retail sales tend to be very volatile from month to month, and one shouldn’t attach much weight on a single data point. Having said that, this slowdown is not encouraging, and if the numbers fall short of the already low expectations, it would simply be another element arguing for more Fed action soon.

Adding everything up, the Fed may be forced to do more in December despite the encouraging vaccine news. Frankly, the latest spike higher in US bond yields will be concerning for the Fed, even if it was caused by ‘healthy’ factors. Rising yields essentially mean that borrowing costs increase on things like mortgages, which could slow the recovery. Hence, the Fed wants the yields on US bonds as low as possible. 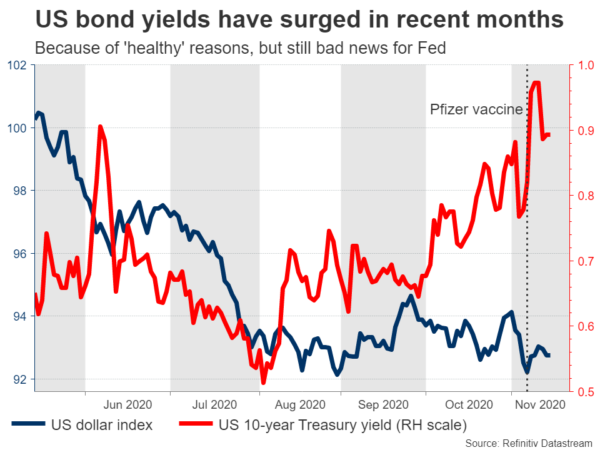 There are two potential avenues for policymakers to drag yields back down: either the Fed simply buys more bonds through its QE program, pushing the yields on those bonds down, or it launches another ‘Operation Twist’ like in 2011. This is when the Fed shifted its bond holdings towards longer-dated maturities, to push longer-term borrowing costs lower.

What’s the outlook for the dollar?

As for the dollar, all this spells some downside risks. If markets sense that more Fed liquidity is on the menu, the currency might naturally take a hit. There are also foreign events to consider, for instance a potential Brexit deal propelling the pound and euro higher, at the dollar’s expense.

But while the risks have increased, none of this is a game-changer either. Unless the US goes into a full national lockdown when Biden takes over in January, it is difficult to envision any of these really sinking the dollar, especially considering that the ECB has been defending the $1.20 level in euro/dollar with a passion lately.

The ECB doesn’t want a much stronger euro, so whenever euro/dollar climbs towards $1.20, the central bank usually tries to ‘talk it down’. Therefore, while the dollar may feel some heat, the downside looks somewhat limited here.

Taking a technical look at euro/dollar, initial resistance to any further advances may be found near 1.1870, where an upside break could open the door for the 1.1915 zone.

On the downside, immediate support might come from the 1.1785 area, before the focus turns towards the 1.1755 region.