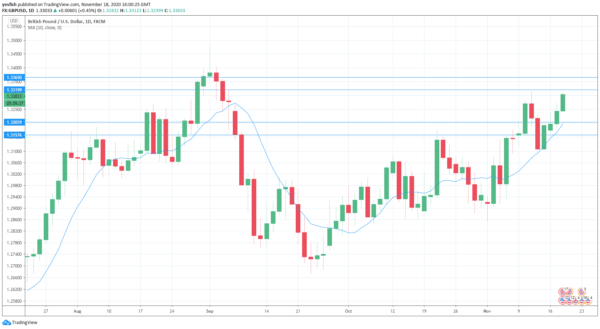 GBP/USD is in positive territory for a fourth straight day, as the pair continues to make inroads against the greenback. Currently, the pair is trading at 1.3305, up 0.47% on the day.

Inflation levels are an important gauge of economic activity, or the lack thereof. UK inflation edged upwards in October, rising from 0.5% to 0.7%. This exceeded the street consensus of 0.5 per cent and pleased investors gave the pound a thumbs-up. The currency has gained close to 1% this week and is creeping up to the 10-week high of 1.3313. Core CPI showed the same trend with a gain of 1.5%, up from 1.3% beforehand. This figure beat the estimate of 1.3%.

Market focus will now shift to the next major British release. Retail sales, a key gauge of consumer spending, will be published on Friday. Retail sales looked sharp in September, with a gain of 1.5%. However, analysts are bracing for a downturn in October, with a forecast of -0.3 per cent.

The markets are keenly monitoring the Brexit negotiations, as a last-minute agreement between the UK and the European Union would be a major boost for the British economy as well as the pound. Britain is scheduled to leave the continent on December 31st, but information about the progress of the talks has been scant. Some analysts have speculated that no news is good news, considering the plentiful availability of bad blood between the sides since the stunning “Leave” vote all the way back in June 2o16.

It will be no mean feat if the parties do announce an agreement, since the gaps between them have been significant. Any deal will have to resolve key issues such as fishing rights, competition rules and how to enforce an agreement. As well, there are questions on the movement of goods between the UK, Northern Ireland and Ireland, even if an agreement is reached. EU leaders hold a summit in Brussels on Thursday, which would be an ideal photo-shoot to announce a deal on Brexit, that is, if there is one. 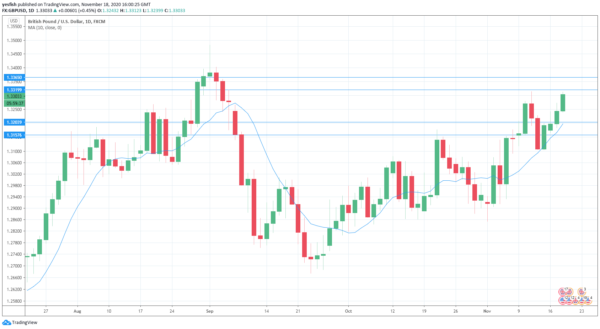