Week Ahead: US Thanksgiving and Another Brexit Deadline 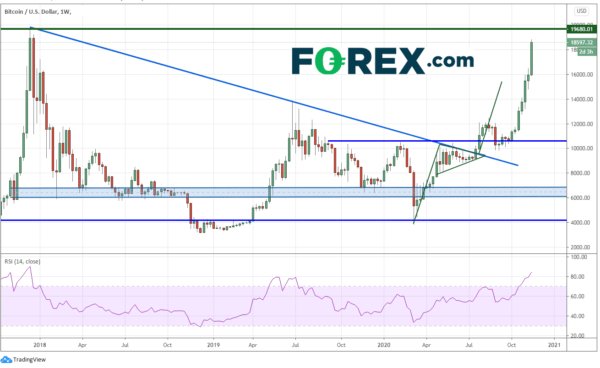 Traditionally,  Thanksgiving week in the US tends to be more on the quiet side.  With the holiday on Thursday and a half day on Friday, many people take some or all of the week off.  However, as we have seen so far in 2020, this year is different.  While the US sessions may be a bit quieter, watch for Brexit headlines as the endgame is near.  The new unofficial Brexit deadline is Monday, Tuesday, or Wednesday.  Markets seem hopeful that “something” will get done as talks continue.  And while in some areas of the world the coronavirus is contained, other areas are still getting hit with second and third waves.  Vaccines may be ready by the end of the year according to Pfizer and Moderna, however they may not be widely available until late Q1 or Q2.

Just as markets were getting used to the notion that “something” will get done regarding Brexit, EU chief negotiator Michael Barnier told UK’s David Frost that talks need to go back on hold, as one of his negotiators has tested positive for the coronavirus.  Talks will continue very shortly, via video conference, however time is running short as any deal still needs to be ratified by the EU Parliament, which meets this week and again on December 14th-17th.  These December dates are said to be the latest that the EU Parliament can ratify any deal, and therefore, the agreement and language must in ready to vote on by then!

As we discussed last week, three main issues continue to threaten the agreement:

Both sides continue to be cautious and note that a deal may not get done.  As a result, many leaders have begun telling their nations to prepare for a No-Deal Brexit.  This would increase tariffs and add barriers to trade for both the EU and the UK, which is why many are expecting some type of deal to get done.  A deal would be more beneficial to the UK, which is why GBP moves more on headlines than the Euro. Stay tuned (again!)

Regarding the coronavirus, while countries such as China, Australia, and New Zealand seem to have the virus back under control, Japan, the US, and most of Europe still have a growing number of cases.  Japan is moving to its highest alert level due to the spread of the virus as Prime Minister Suga continues to work on a third supplemental budget.  The UK has been under lockdown since November 5th and it appears to be working, as the R rate to between 1.0 and 1.1.  The R number last week was between 1.0 and 1.2.  Chancellor of the Exchequer Sunak continues to work on a stimulus plan.  While many European countries are still under lockdown and restrictions, the ECB has already signaled that they will  provide more stimulus when they meet on December 12th.  However, the EU is having trouble passing its 1.8 trillion-euro budget, which would include coronavirus recovery stimulus.  The EU budget must be approved by all 27 member nations; however, Hungary and Poland are currently vetoing it citing “rule of law”, claiming that is would punish countries that reject immigration.  In the US,  the number of new daily cases continues to rise.  Some states, such as California and Minnesota have gone into partial or complete lockdown.  In other states, only some cities have gone into lockdown or under restrictions, such as Philadelphia and New York.  With the US Thanksgiving holiday on Thursday, many are worried about large family gatherings where the virus can quickly spread.  Congress continues to agree to work out a fiscal stimulus package, but hopes are slim until Joe Biden takes over the Presidency on January 20th.

On the bright side, pharmaceutical companies Pfizer and BioNTech have a vaccine which studies show is 95% effective at preventing the coronavirus.  On Friday, they filed for emergency use authorization.  If approved, Pfizer said the vaccine would be ready to ship to front line workers and those most in need in a matter of hours.  They hope to begin distribution by the end of the year.  However, wide distribution isn’t expected until Q2 2021.  Moderna’s vaccine has shown similar results and they are expected to apply for emergency authorization by the end of November!

As we near end of month, traders will get their first look at manufacturing and services data for November on Monday.  In addition, with the US holiday, much of the month end data from the US has been pushed to Wednesday, including a second look at Q3 GDP,  New Home Sales, and the Minutes from the latest FOMC meeting.  Other important economic data events are as follows:

Chart of the Week: Weekly BTC Have we seen this before???  Bitcoin is on a tear!  Since putting in a false breakdown below horizontal support the week of March 9th near 3850, BTC has been on a one way move higher.  The cryptocurrency moved off the lows into a pennant formation.  During the week of July 20th, it then moved above resistance and above the downward sloping trendline from the all-time highs near 19666.  BTC met the target for the pennant of 15443 two weeks ago and it has continued higher, up over 16.5% LAST WEEK ALONE!  Bitcoin is currently trading at 18600, and there is no resistance until the previous all-time highs.  Support isn’t until last week’s lows at 15875.  Caution that the RSI is in overbought territory on the weekly near 84.40, however at the all-time highs the RSI was at 90.22!  As with the run up at the end of 2017, the parabolic nature of this move suggests that there will be some type of pullback.  However, don’t expect it to be as dramatic as the first time.

Once again, watch the headlines for Brexit news.  Comments from officials seem to be priced into the market.  Traders want to see pen to paper!

If you are celebrating the Thanksgiving holiday next week, please enjoy, be responsible and stay safe!