USD Seems To Be Rebounding

The USD yesterday continued to weaken against a number of its counterparts, yet during today’s Asian session rebounded somewhat recovering part of the yesterday’s losses. Fundamentally the negotiations in the US Congress about a fiscal stimulus deal seem to continue to be the main issue for USD, albeit a number of analysts also have started to suggest that the market may have already priced in such a scenario. Nevertheless, negotiations seem to intensify given that Republican Senate leader McConnell tweeted that “Senate’s going to keep working right through the weekend until we get an outcome”. On the other hand, it should be noted that yesterday’s release of the initial jobless claims figure surprised the markets as it was higher than expected, intensifying worries for the US employment market. We may see the markets risk-on sentiment easing somewhat providing finally some support for the USD, otherwise the USD could be allowed to continue its weakening.

AUD/USD continued to rise yesterday testing the 0.7625 (R1) resistance line yet proved unable to clearly break it and the pair retreated lower. As the AUD/USD broke the upward trendline incepted since the 15th of December, for the time being we switch our bullish outlook in favor of a bias for a sideways movement until the AUD/USD decides on the direction of its next leg. Should the pair find fresh buying orders along its path, we could see it breaking the 0.7625 (R1) line and aim for the 0.7680 (R2) level. If the market’s selling interest persist, we could see AUD/USD, breaking the 0.7560 (S1) line and aim for the 0.7480 (S2) hurdle.

The pound’s ascent against the USD, JPY and CHF seems to have been curbed in today’s Asian session as the UK and the EU showed a rather pessimistic tone for the outcome of their negotiations regarding a post Brexit trade agreement. A spokesman for UK PM Boris Johnson is reported to have said that it was “very likely” there would be no agreement unless the EU changed its position “substantially”. That would imply a hardening of UK’s position just before the finish line of the negotiations. EU Commission President Ursula von der Leyen stated that it would be “very challenging” to overcome the “big differences” remaining according to media, intensifying the pessimistic feeling. The situation becomes even more critical given that the EU Parliament has set Sunday as a deadline for approving a Brexit deal this year. Brexit remains the main issue for pound traders given the high degree of uncertainty and stakes in play, and its characteristic that even BoE’s interest rate decision yesterday gained little interest. Despite recognizing that Brexit tends to monopolize pound trader’s attention, we would also highlight UK’s financial releases today.

GBP/USD continued to strengthen yesterday and at some point even tested the 1.3585 (R1) yet in the late American session and during the Asian session today retreated lower relenting the gains made during the day. As cable broke the upward trendline incepted since the 15th of the month, we switch our bullish outlook in favour of a sideways bias, initially keeping a wait and see position. Should the bulls regain momentum, we may see GBP/USD having another go for the 1.3585 (R1) resistance line and once that is broken the path opens for the 1.3700 (R2) resistance level. On the other hand, should bears take the initiative, we could see GBP/USD breaking the 1.3470 (S1) support line and aim for the 1.3375 (S2) support level. However as the situation is critical as mentioned above, we may witness extraordinary high volatility for the pair.

Today during the European session, we note Germany’s producer prices for November, UK’s retail sales growth rate also for November, Germany’s Ifo business climate for December and UK’s CBI trends for Orders also for December. In the American session, we get Canada’s retail sales for October and later on from the US we note the Baker Hughes weekly oil rig count. Also please note that during the American session Chicago Fed President Evans and Fed’s Board Governor Brainard are scheduled to speak. 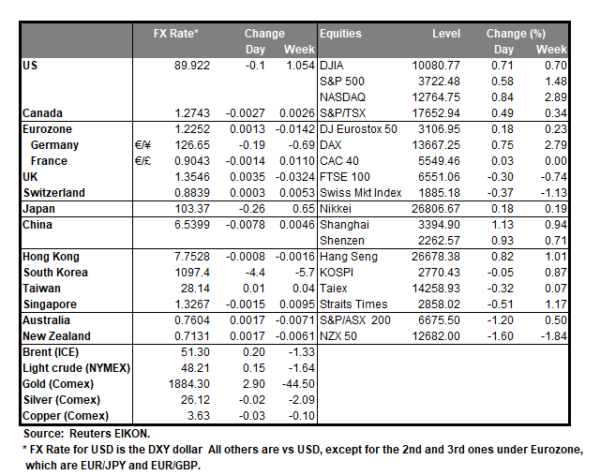 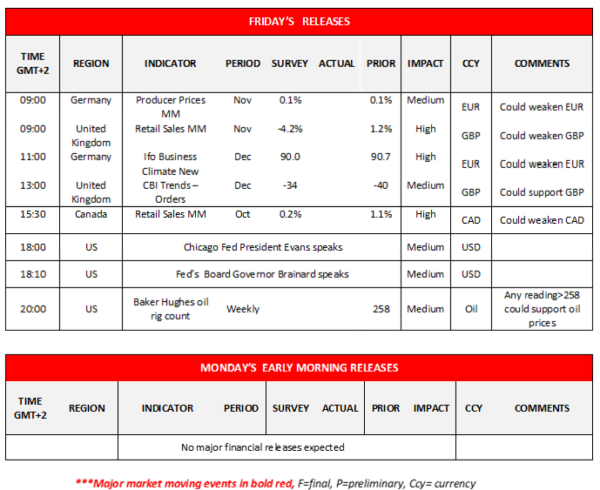