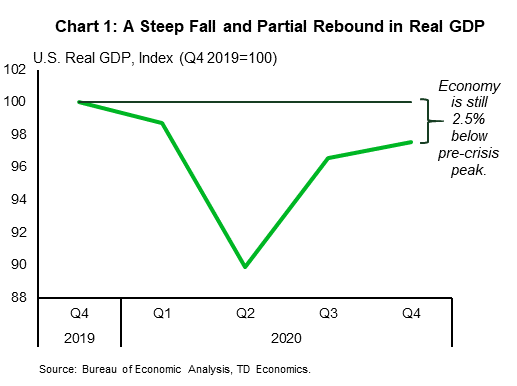 Not that anyone necessarily wants to remember it, but 2020 was a year for the record books. With U.S. GDP data for the fourth quarter released this week, we now have a complete picture of the economy’s performance during the pandemic-ridden year.

It was a wild ride. As lockdowns took effect in March, economic activity fell sharply. From the fourth quarter of 2019 to the second quarter of the year, real GDP declined by 10.5%, with the biggest drop over the March and April period. The rebound was almost as sharp, at least initially, with growth of 7.5% (non-annualized) registered in the third quarter. Progress, however, slowed in the fourth quarter to just 1.0%, as the virus spread worsened.

When all was said and done, the American economy ended the year 2.5% smaller than it started (Chart 1), though with huge disparities between industries and sectors. Parts of the economy least impacted by the virus – the production of things that you can consume at home (including the services provided by homes themselves) did even better than they would have without the health crisis. Durable goods consumption, including new and used vehicles, and new and existing home sales were particular bright spots. Higher-contact services, on the other hand, never had much of a recovery and are still well shy of pre-crisis levels (Chart 2).

Fortunately, as 2020 ended, vaccines offered hope that 2021 would be a year of solid economic rebound. Still, the virus is not done with us yet. New, more virulent strains are spreading even as vaccines are being distributed. As such, the economic outlook must be separated into two periods. The next few months will be defined by the struggle to contain the virus and vaccinate as many people as possible against it. As this continues, economic data will remain weak and the attention of policymakers on how best to support it.

This was the message delivered by the Federal Open Market Committee (FOMC) and its Chairman, Jay Powell, this week. While the Fed is aware of the potential light at the end of the tunnel, it is setting policy as if it is not sure when or if we will get there. As long as economic activity is weak, the policy rate will remain at rock bottom levels and asset purchases will continue apace.

Eventually, the Fed will have to go further in recognizing the potential upside to growth and inflation possible, as restraints on activity diminish. However, it has updated its strategy to allow itself to be more reactive than proactive to this change. With a short-term goal of pushing inflation above its medium-term 2% objective, the Fed is less concerned about allowing the economy to run hot.

This suggests a new balance of risks around the economic outlook. Assuming vaccination campaigns are successful, the second phase could surprise on the upside. Households with ample savings and several months of cabin fever could unleash an even faster pace of spending than expected. With businesses also shut down for several months, getting back up to capacity could be challenging. And, if you can’t meet all the demand at current prices, why not raise them?

Canada – Growth Continues to Surprise on the Upside

North American financial markets were choppy this week. Concerns related to delayed vaccination schedules and new virus variants continue to weigh on sentiment. The S&P/TSX Composite followed its global peers lower, dropping 2.5% on the week (as of writing). Elsewhere, WTI oil prices held firm, rising 1% to US$53. Larger-than-expected inventory draws in the U.S. and other supply offsets are temporarily outweighing the lackluster demand picture. After a modest downshift against the USD, the Canadian dollar pared some of its losses following today’s real GDP report.

Turning to economic data, the highlight was today’s industry-level real GDP release for November (Chart 1). Canada’s economy continued to rebound at a faster-than-expected pace, clocking in a 0.7% increase for the month (beating consensus expectations for a 0.4% uptick). The details were also encouraging, with broad-based increases spanning 14 of the 20 industries. Natural resource industries did the heavy lifting, with the mining and oil and gas extraction industry growing by 3.9% on the month. Oilsands production continued to recover in tandem with an improving oil price environment. Mining for base metals, precious metals, and some minerals (potash) added support. An improving commodity outlook bodes well for these industries in the coming months. Elsewhere, the manufacturing industry also held strong, growing at 1.7% on the month.

Meanwhile, the biggest surprise in today’s report was the service sector’s resilience. While contractions were seen across some industries (the arts and entertainment industry, for instance), other close-contact industries (retail trade and accommodation and food services) managed to avoid slipping into negative growth territory. In other good news, Statistics Canada’s flash estimate for December points to continued growth at 0.3%. Considering the modest drop in employment and hours worked during the month, this outturn would be encouraging if it materializes.

In contrast to the first wave of infections, the impacts of the second wave appear to be more modest thus far. Still, caution remains warranted. Real GDP remains 3% below its pre-pandemic (February) levels. The journey to recoup the remaining 3% is still expected to be bumpy. Avoiding a contraction in economic activity in the first quarter of 2021 is not guaranteed yet. Higher-frequency indicators (TD spend data, mobility data) are signaling a pullback in activity in light of still-elevated caseloads and renewed restrictions.

This deterioration in the near-term outlook was also captured by January’s CFIB small business confidence index (Chart 2). The year-ahead outlook for businesses has encouragingly improved, but the near-term outlook continues to rest on shaky grounds. The second wave of infections and the associated restrictions are also expected to exacerbate long-term labour market scarring. Recent news of potential vaccine delays have added salt to the wound. We’ll take the good news this week’s real GDP data had to offer, but won’t hold our breath for continued upside surprises in the coming months. 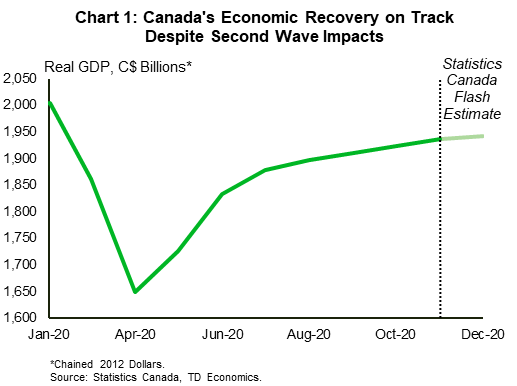 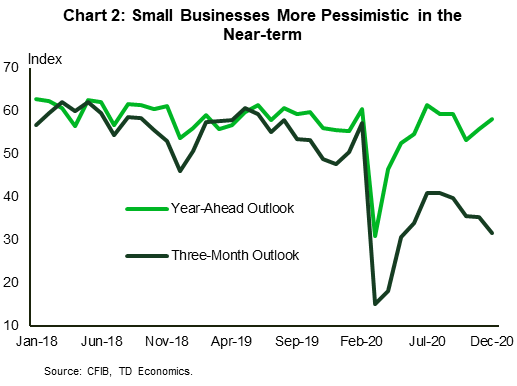 The seasonal swing in payrolls in January is the largest of the year, by far, raising the potential for volatility, even in normal times; the seasonal factors add around 2% (almost 3 million) to the monthly change. We suspect the boost will be too large this year, with seasonal patterns changing amidst COVID. The result: exaggerated strength in payrolls and a small drop in the unemployment rate. Average hourly earnings will likely continue to show a net pickup due to mix shifts—with more net weakening in low-wage than high-wage jobs boosting the average level. The 12-month change in hourly earnings, currently 5.1%, was around 3% through February 2020 (pre-COVID). 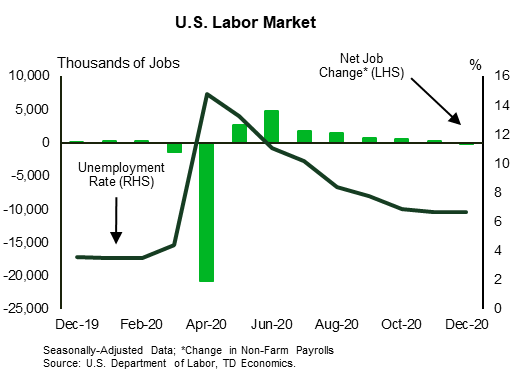 Manufacturing surveys already reported for January have been mixed, resulting in no clear directional signal for the ISM index, but we expect at least a modest decline after stronger-than-expected data a month ago. The level will likely still be high. Optimism about vaccines and fiscal stimulus is probably offsetting new COVID-related weakening. 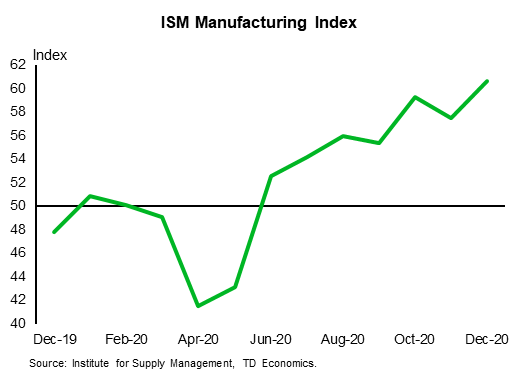 Services surveys already reported for January have mostly signed slowing, suggesting a decline in the ISM index. The level will likely still be solidly over 50, however. Optimism about vaccines and fiscal stimulus is probably offsetting new COVID-related weakening. 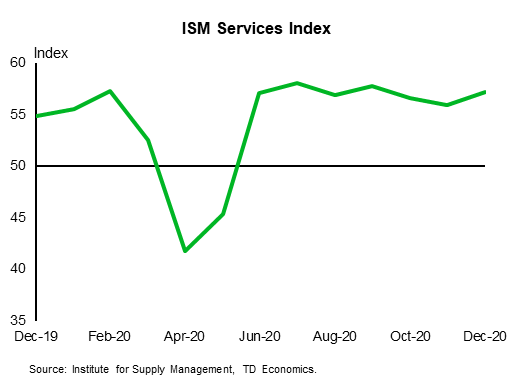 The Canadian labour market will begin 2021 on a downbeat note with TD looking for employment to decline by 90k, reflecting more stringent lockdowns imposed across Eastern Canada after the reference week for the December survey. Job losses will be felt most prominently across services with a large drag from retail trade. Accommodation/food services and arts/recreation will continue to exert a headwind, however, these two industries have already seen total employment fall by ~10% over the last 3 months which may result in more modest job losses from recent lockdowns. The goods-producing sector should fare better than services; Quebec imposed some restrictions on manufacturing/construction in early January, but elsewhere we anticipate few headwinds to goods. January job losses should be concentrated among part time workers, with a 90k decline leaving the unemployment rate at 9.1%. 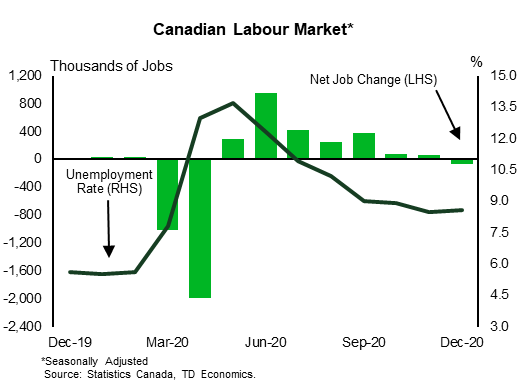 TD looks for the merchandise trade deficit to edge lower to $3.0bn in December on higher exports, partially offset by a more modest increase for imports. Motor vehicles should provide the main driver for exports after advance US trade flows showed a surge in auto imports, while forestry products should contribute another source of strength. Refinery shipments will receive a tailwind from higher petroleum prices, while a 1.5% increase for factory prices will support total (nominal) exports. Imports should see more modest gains, after having already recovered to pre-COVID levels in October. 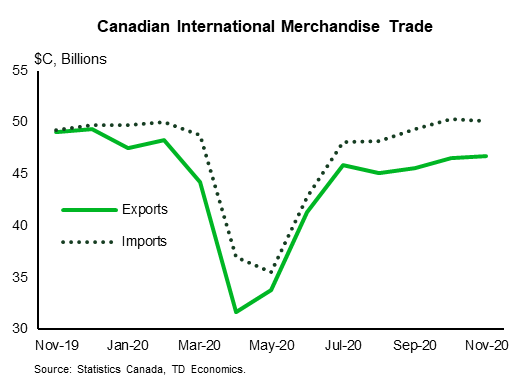