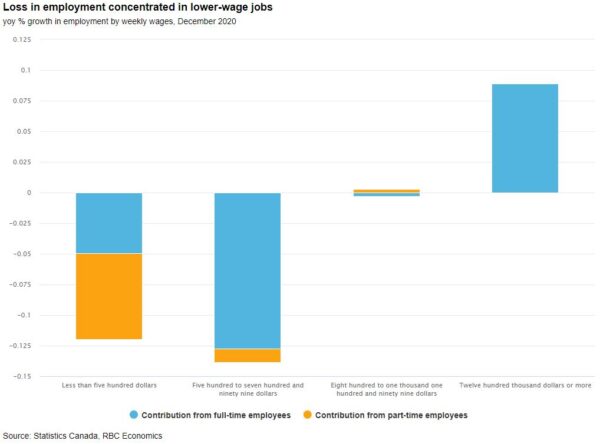 Escalating virus spread and containment measures likely caused labour markets to shed jobs for a second straight month in January. We expect Canadian headline employment to have fallen 40k. This would build on December’s 53k drop which was the first decline in top-line employment since last spring.

We expect the hard-hit hospitality sector to soften again, with containment measures leaving restaurants closed to in-person dining and households sticking closer to home than usual. Retail employment also likely fell along with storefront closures – although sales likely have held up better than in the spring lockdown as both merchants and consumers get used to transacting online or via curb-side pickup. And the shift to remote-learning for schools in much of the country likely resulted in some layoffs, particularly among hourly teacher support staff. But the economic recovery more broadly is increasingly bifurcated and we look for labour markets to have held up well outside of the hospitality, retail, and education industries. Businesses in the industrial sector are once again citing labour shortages as a key impediment to growth, and employment in professional services has been surging.

January’s report is likely to show that job losses continue to be heavily concentrated among lower-paid workers. Expanded EI and CRB programs are providing substantial income replacement for these workers leaving household purchasing power intact even in the face of weakening labour market conditions.

US payroll employment likely remained soft in January amid virus resurgence. We expect a 200k increase that would just offset the 160k decline in December, and largely because shutdowns are occurring in a month that normally sees a lot of seasonal unwind of holiday hiring to begin with. The number of people receiving jobless benefits has increased since the December survey period.

We expect a modest gain in exports (up 1.5%) in December driven by a sizable increase in energy prices (which implies less of an increase in volume terms). That alongside a small decline in imports (down 0.3%) should leave the trade deficit narrower at $2.5 billion from $3.3 billion in November. 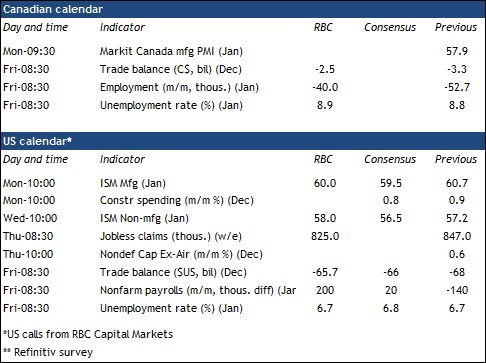