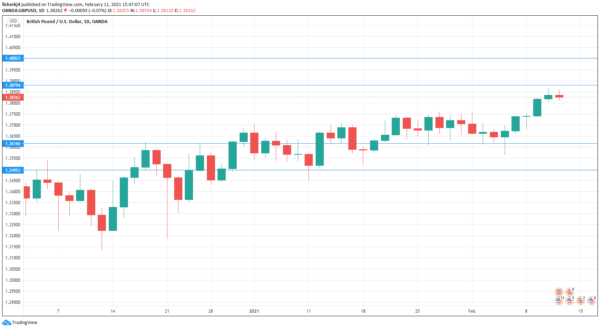 The British pound is almost unchanged in the Thursday session. Currently, GDP/USD is trading at 1.3828, down 0.07% on the day. In Asia, China and Japan are closed for the Lunar New Year, resulting in a lack of movement in the equity and currency markets on Thursday.

Investors will be treated to a data dump out of the UK on Friday. The highlights include the GDP reports and Manufacturing Production (7:00 GMT), so we could see some stronger movement from the pound on Friday, after a sleepy Thursday. The quarterly GDP report has seen double-digit swings, as the economy went into a tailspin in Q2 (-20.2%), with a spirited recovery in Q3 (+15.5%). In contrast to these figures, the markets are expecting a muted Preliminary GDP for the first quarter, with a street consensus of 0.5%, which points to practically no economic growth.

The monthly GDP report showed a weak read of -2.6% for November, although this decline was not a steep as the estimate of -4.6%. December is expected to be much better, with an estimate of 1.0%. The UK is currently under lockdown, which is hampering economic activity. With the vaccine rollout gathering steam, this should lend a boost to the economy moving forward in 2021. The ING Group is projecting a strong rebound for the UK, to the tune of 5% in the second quarter.

Another tier-1 event that traders and investors should monitor is Manufacturing Production. The indicator showed strong growth in mid-2020, including a read of 11.0% in June. However, recent releases have been muted and growth was just 0.7% in November. An identical figure is expected in the December release.