Euro Down Despite Sharp Confidence Data 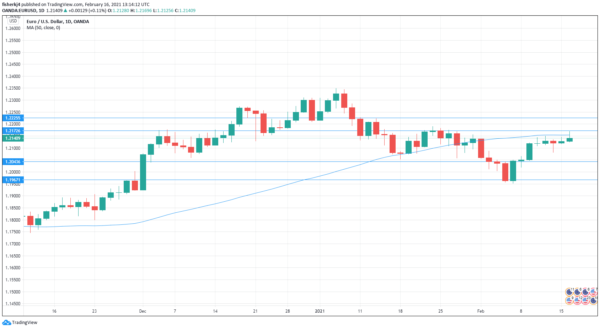 The euro is showing slight losses in the Tuesday session. Currently, EUR/USD is trading at 1.2110, down 0.15% on the day.

The German economy continues to struggle under the weight of Covid-19, but there was some positive news on Tuesday. The well-respected ZEW Economic Sentiment survey climbed to 71.2 in January, up from 61.8 beforehand. This sharp gain was all the more impressive, as the street consensus projected a drop to 59.7. . The ZEW summed up the impressive data as follows:

“The financial market experts are optimistic about the future. They are confident that the German economy will be back on the growth track within the next six months. Consumption  and retail trade in particular are expected to recover significantly, accompanied by higher inflation expectations”

The ZEW release for the eurozone indicated a similar upturn, with a rise from 58.3 to 69.6 index points. As noted by the ZEW, inflation levels have been moving higher in both Germany and the eurozone. At the same time, there are plenty of signs of trouble. Eurozone GDP for the fourth quarter of 2020 came in at -0.6%, revised from the initial estimate of -0.7%. In comparison to Q4 of 2019, GDP shrank by 5.0%, as the economy was severely hampered by Covid-19. As well, employment rose by 0.3% in December, much slower than the 0.9% clip and missing the forecast of 0.9%.

Bitcoin continues to grab the financial headlines, as the cryptocurrency cracked the USD 50,000 level for the first time on Tuesday, and is up over 70% this year. Bitcoin has received a key endorsement from Elon Musk, who plowed some 1.5 billion dollars into the asset. However, ECB governing council member Gabriel Makhlouf, who is the head of the Bank of Ireland, said on Tuesday that he would not buy bitcoin, comparing the frenzied buying to the infamous tulip mania in the Netherlands in the 17th century, which ended in a massive collapse.