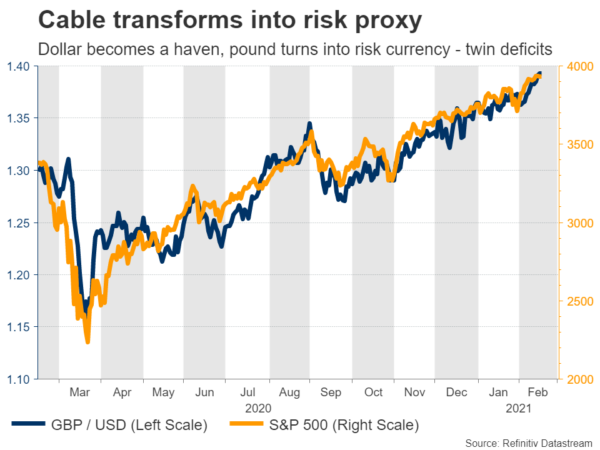 The latest batch of British data will hit the markets on Friday. Retail sales will be released at 07:00 GMT ahead of the PMI business surveys at 09:30 GMT. Forecasts point to relatively soft numbers, which would confirm the economy remains in a deep hole thanks to the lockdowns. Yet, that’s unlikely to change the pound’s fortunes, which continues to roar higher as the UK leads the vaccination race.

It’s been a fantastic year for the British pound so far. The domestic economy is still in dire straits, but the incredible pace of immunizations has convinced investors that better days lie ahead. The UK has vaccinated almost 25% of its citizens with the first dose, easily outpacing America and the Eurozone.

Its elderly population that is most at risk has been mostly covered already, so hospitalizations are set to fall dramatically, allowing for a sustainable re-opening of the economy. In turn, the brighter economic outlook has seen markets price out expectations for negative rates by the Bank of England, adding more fuel to the pound’s rally.

Beyond all this, the cheerful mood in the broader market is another element behind sterling’s gains. The pound – and Cable in particular – has a strong correlation to stock markets nowadays.

This is owed to the dollar acting like a safe haven and to the UK’s twin deficits. When a country runs massive current account and fiscal deficits, it is essentially a net-borrower that relies on capital flows from abroad. As such, when global markets are partying, the pound benefits, but when the mood turns sour there are doubts around whether these flows will continue to roll in, hurting the currency.

Disappointments to be shrugged off?

Turning to Friday’s releases, retail sales are forecast to have declined by 2.5% on a monthly basis in January, which seems natural following the holiday season and considering the ongoing lockdown.

On a more cheerful note, the preliminary services PMI for February is projected to rise to 41.0 from 39.5 in the previous month. However, the manufacturing index is expected to decline to 53.2, from 54.1 earlier. That said, since services account for almost 80% of the economy, the composite index that blends the two measures is seen rising to 42.2, from 41.2 in January.

Overall, it’s doubtful whether even a disappointment will inflict much damage on the pound. Investors already know the lockdowns have been devastating, and are focusing on the future instead. Hence, disappointing data may be seen as ‘old news’, whereas positive surprises could signal that the economy held up better than expected.

Taking a technical look at Cable, if the bulls manage to pierce above the recent peak of 1.3950, their next target may be the psychological 1.400 handle.

On the downside, support could come initially from the 1.3760 zone, before the recent low of 1.3560 comes into play.

All eyes on vaccinations, and Brexit

Going forward, the pound’s fate hangs mostly on vaccinations. If the UK remains ahead of America and the Eurozone on this front, expectations for a stronger recovery could continue to build and the pound could continue to dominate its FX partners.

The key downside risk is any virus mutation that proves resistant to the existing vaccines, as that could nullify much of the progress the nation has made on immunizations.

The other risk to watch is Brexit. The rules governing financial services haven’t been ironed out yet. This story is out of the spotlight for now, but if the UK doesn’t manage to secure full access to the EU’s services market soon, it could come back to haunt the pound.