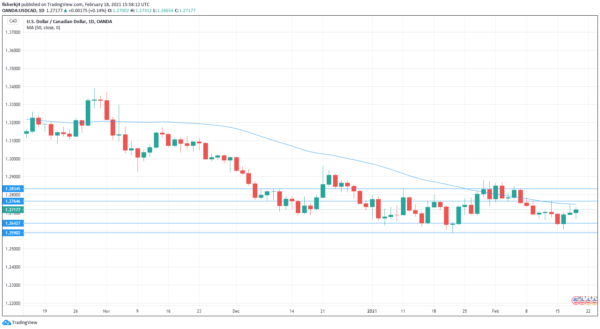 The Canadian dollar is down slightly in the Thursday session. Currently, USD/CAD is trading at 1.2703, up 0.02% on the day.

Canada’s ADP nonfarm payrolls report has managed just one gain over the past five months, pointing to weakness in the labor market. After a small decline in December of -28.8 thousand, January was a disaster, with the economy shedding some 231.2 thousand jobs. The ADP report comes after the official Stats Canada release two weeks ago (Employment Change), which came in at -212.8 thousand, its worst reading since April 2020, when the economy was largely shut down due to Covid-19. These releases point to significant weakness in Canada’s labor market. Still, investors did not pay all that much attention to the ADP report, perhaps expecting a sharp decline after the official release. The response of the Canadian dollar has been muted on Thursday.

Canada’s economy has been hit hard by Covid, but nonetheless, headline inflation in January rebounded from a decline of -0.2% and came in at 0.6%, its best showing in seven months. Core CPI, which excludes the most volatile items in the headline read, gained 0.5%, bouncing back after a decline of -0.4%.

US retail sales sizzled in January, with a gain of 5.3%. This was a seven-month high and came after back-to-back declines. Core Retail Sales showed a 5.9% gain, also after two straight declines. It’s Canada’s turn on Friday, with retail sales data for December. The forecast is -2.5% for headline retail sales and -2.4% for core retail sales, which would be indicative of a sharp contraction in consumer spending. If the estimates prove accurate, it could be a rough day for the Canadian dollar on Friday.