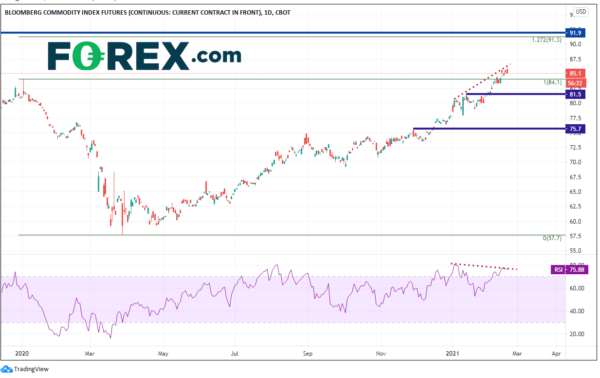 Inflation and inflation components of economic data were sharply stronger last week than in previous months.  Yet, one central bank speaker after the next continued to march out and say that inflation is nothing to worry about.  This week, Fed Chairman Powell will be front and center, as he gives his semi-annual Monetary Policy Report to Congress on Tuesday.  In addition, with the Texas Freeze over, refineries will be back online in the US.  Vaccines that were slowed by the bad weather across the US  will also begin moving again this week.  With talk of impeachment over, the US Senate will move on to the pressing $1.9 trillion stimulus package.  To end the week, the US will release January’s Core PCE index, which is a main economic indicator the Fed monitors to determine inflation.

On February 12th, the University of Michigan Preliminary 1-year inflation expectations reading was 3.3% for February vs 3.0% in January.  Last week, PPI from both the US and the UK were both stronger than expected (US core PPI was 2%!).  Sweden’s inflation jumped from 0.5% to 1.7% annualized!  The Prices Paid component of the US Philly Fed Manufacturing Index for February was 54.4 vs 45.4 and the Sector Input Prices Component of the US IHS Markit US Manufacturing PMI was 73.3, the highest since April 2011! Commodities: through the roof.  Lumber is at all time new highs. Platinum is at the highest levels since 2014.  Copper and Iron Ore are at the highest levels since 2011.  Crude Oil is at post-pandemic highs (recall in April that the front month futures contract traded at -$40.32!).  Soybeans are up over 50% and corn in up over 90% in the last year.  Yields are at post pandemic highs (10-year yields were as high as 1.36% on Friday vs 1.568% pre-pandemic,  1 year ago).  Did I mention stock markets at or near all-time highs, or at least post pandemic highs?  How about Bitcoin prices?

Last week, central bank officials from around the world, including the RBA, BOE, ECB, and the FED, continued to speak about how THIS inflation is transient.  They spoke about how the inflation we are seeing now cannot be sustained.   They talked about how they are not worried about inflation and how they expect current monetary stimulus to remain in place through 2021 and into 2022.  Some even said they don’t expect to see inflation reach their preferred targets until 2023 (most central banks targets are between 2%  and 3%.)  On Tuesday, BOC Governor Macklem will get his chance to speak, as well as Fed Chairman Powell, who will be speaking to Congress.   Hopefully, some members of the Senate Banking Committee will question Powell on inflation.  Expect more of the same language from the BOC and the FED.  The one outcome that everyone will be waiting on is this: Who was right?  Central Banks or the Markets.

Now that the Texas freeze and the bad weather across the US are done and over with, expect crude oil and vaccines to begin flowing again.  This was only one of the reasons the price of crude has moved to recent highs.  The draw on inventory since the beginning of the year (according to the API) has been the main reason. Prices may continue to rise as long as output remains at current levels and expectations for post-pandemic demand remain constant.

There are two main factors contributing to post-pandemic demand for oil.  The first is the rollout of the vaccines.  How long will it take to vaccinate everyone?  When can people expect to go back to the “old” normal?  Some countries are moving faster and doing a better job at containing outbreaks than others.  This will help determine demand,  especially for services.  The other factor is the variants.  How well will the vaccines stand up to variants of the coronavirus.  AstraZeneca has already said their vaccine does not do well vs the South African variant.  It is still yet to be seen how vaccines will stand up to the UK variant and the Brazilian variant.   In addition, how well can the variants be contained?  Case numbers around the world are dropping.  However, the variants are said to be more contagious.  If true, can they be stopped without another more shutdowns?

Show Me the Money

US Congress has been tinkering with the $1.9 trillion stimulus package for a month now.  House leader Pelosi said she wanted the package passed by “the end of the month” (February).  Currently, the House is expected to vote on February 26th.  However, Senator Schumer has said he hopes the bill will be passed by the time current federal unemployment benefits expire on March 14th.  Biden is already working on his next spending package: a national infrastructure upgrade.  Note that Larry Summers, former Treasury Secretary, said that he is concerned that the Biden’s stimulus plan may cause inflation.  However, Fed’s Powell (and the IMF) both dismissed this.

There are many earnings due out this week.  However, most are smaller companies whose impact will not be felt on major indexes.  However, there are a few notables this week.  They are as follows: ABF, HD, HSBC, M, SQ, LLOY, NVDA, LOWE, AAL, STAN, CRM, ABNB, MRNA, IAG, BRK

End of the month means end of the month data.  This week’s calendar also includes the “Reopening” plan for the UK.  In addition,  the UK will release the Claimant Count, the RBNZ will hold their Interest Rate Decision meeting and the week culminates with the PCE Price Index.  The Core PCE Price Index is one of the Fed’s favorite tools for measuring inflation.  We’ll also get a second look at US Q4 GDP.  Other important economic data is as follows:

This chart is presented in order to show how an overall basket of commodities has done recently, as opposed to one single commodity.  The Index consists of Energies, Grains, Industrial Metals, Precious Metals, Softs, and even Livestock, at various weightings.  The index put in a low on March 27th, 2020 of 57.70 and has been rising since.  On Tuesday last week,  the commodity index moved above the 2020 highs from January 3rd, 2020 at 85.60 to a high of 86.00 on Friday.  Price has moved over 48% since the pandemic lows.  Resistance above is at the 127.2% Fibonacci extension from the highs of January 3rd, 2020 to the lows of March 27th, 2020, near 91.30.  Above there is horizontal resistance from May 2018 near 91.90.  Given a huge runup like this, traders may expect a pullback, especially since the RSI is in overbought territory and diverging from price.  The breakout level of 84.10 is the first level of support, followed by horizontal support at 81.50 and 75.75.

With more central bank officials speaking this week, expect much of the same rhetoric: this inflation cannot be sustained, don’t worry about inflation, etc. There are 2 sayings over the years that come to mind when I think of the price action and central bank speakers last week: