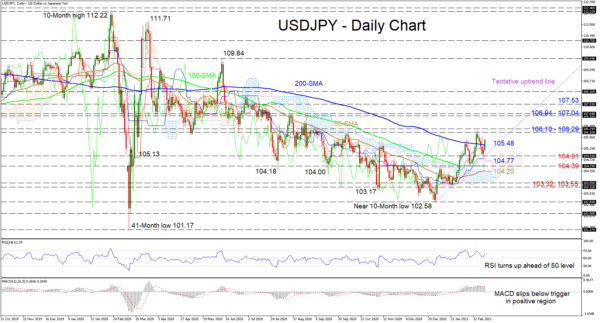 USDJPY has regained its footing with a bounce near the tentative uptrend line, drawn from the low of 102.58, which has reinforced the improving price structure. The flattening blue Kijun-sen line is reflecting the solid pullback under the 200-day simple moving average (SMA), while the rising red Tenkan-sen line is endorsing the pickup in sentiment.

The short-term oscillators are currently transmitting mixed signals in momentum. The MACD, some distance above zero, has slid below its red trigger line, while the RSI is climbing in the bullish territory. Noteworthy is the flattening 100-day SMA and the rising 50-day SMA, which are together promoting a forthcoming boost in positive sentiment.

If buyers persist and secure a close above the 200-day SMA, initial upside constraints could develop at the resistance band of 106.10-106.29. Overrunning this boundary, the pair may then jump to challenge the 106.94-107.04 border. Should the bulls remain optimistic, they could prolong the ascent targeting the 107.53 high.

If sellers steer the price beneath the 200-day SMA at 105.48, early tough support could arise from the ascending trend line and the adjacent low of 104.91. However, slipping from here, the price could find some friction from the neighbouring blue Kijun-sen line at 104.77 before pursuing the 104.39 trough, where the 100-day SMA currently resides. If the price deteriorates further, the 50-day SMA and the cloud around 104.20 could come next, before the bears aim for the next support zone between the 103.55 and 103.32 lows.

Summarizing, USDJPY’s bullish tone from the beginning of the year appears intact above the trend line and the 104.91 boundary. Furthermore, an approaching bullish crossover between the 50- and 100-day SMAs could reinforce this outlook.