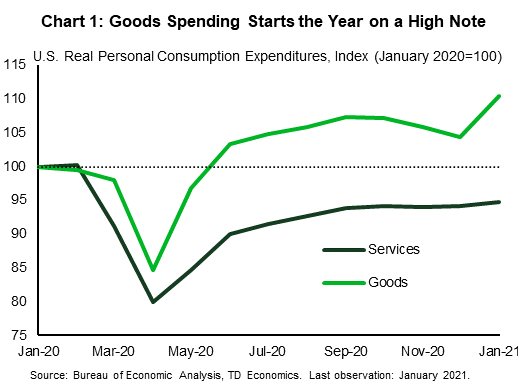 U.S. – The American Consumer is Back

For a change, the S&P 500 did not have the best week. As of writing, it was down 2.4% compared to last week’s close. Blame the Treasury yield. The 10-year Treasury yield hit the highest point in a year amid a more upbeat global economic outlook and rising concerns over inflation. The decline in equities was primarily led by large cap technology stocks, which have so far made major gains during the crisis. Still, the S&P 500 is 3% higher than where it was at the start of this year.

On the monetary policy front, the Federal Reserve’s Chairman Powell probably had the most optimistic assessment of the economy since the start of the pandemic. He told Congress that there was “hope for a return to more normal conditions”. Still, Powell signaled he is in no rush to tighten monetary policy or drawdown asset purchases even with a brighter economic outlook. The Chairman also reassured markets on the inflation front. He said that inflation dynamics do “not change on a dime” and that “the economy is a long way from our employment and inflation goals”.

In terms of economic data, personal income surged by 10% month-on-month in January, in line with market expectations. The strength was primarily due to the 52.6% increase in social benefits which include stimulus checks and expanded unemployment insurance benefits. Meanwhile, personal spending rose by 2.4% and was led primarily by goods which went up 5.8% (Chart 1). The rise in goods spending was seen across the board, with recreational goods and vehicles driving most of the gains. The services sector also showed resilience, eking out a 0.7% growth in spending. Gains were mostly led by food services and accommodation, the industry which has been in the line of fire right from the outset of this pandemic.

Turning to the labor market, jobless claims fell far more than expected (Chart 2). Initial claims came in at 730k, down 111k from the prior week, and beating the consensus of 825k. This was the largest weekly drop since the end of August. But not all states performed the same. California and Ohio registered the biggest declines while Illinois and Missouri recorded notable growth. Continuing claims came in at 4.4 million, 41k less than the consensus and down 0.1 million from the week before. Still, both claims are almost three times higher than their pre-pandemic levels. The labor market remains the weak link in an otherwise stronger-than-expected start to the new year for the economy.

Meanwhile, revisions to the second GDP release were relatively minor. The economy grew 4.1% annualized in the final quarter of last year, slightly higher than the initial estimate of 4.0%. Government and household spending were both revised down 0.1 ppts. Meanwhile, non-residential fixed investment was adjusted up 0.2 ppts, driven by stronger spending on equipment and intellectual property products. Residential investment was also revised higher by 0.1 ppts. Given the relatively minor adjustments to the quarterly data, there were no changes to the annual GDP, which shrank 3.5%.

It was an up-and-down week for the TSX. Like other North American equity markets, the index was bolstered by Fed Chairman Powell’s two-day testimony to Congress, where he gave assurances that monetary policy will continue to nurture the recovery through low rates and asset purchases. However, these gains were on track to be undone on Friday, due in part to some late-week retracement in energy prices. Indeed, as of writing, WTI prices had given back some of the early-week gains. The end of the week also brought some positive news, as Canada approved the use of the AstraZeneca COVID-19 vaccine. Some 20 million doses of the vaccine have been procured and up to 500 thousand doses could arrive as early as March.

Bank of Canada Governor Macklem also spoke this week, striking a similarly cautious tone to his U.S. counterpart. His comments focused on the job market, noting that over a half a million Canadians have been out of work and actively looking for a job for longer than 26 weeks (Chart 1). This is the highest number in nearly 30 years. He also reiterated the Bank’s forecast that the output gap will close only in 2023 and that monetary policy will likely need to remain accommodative for a considerable period.

On the data front, the week was relatively light on releases, although not completely devoid. The backward-looking Survey of Employment, Payrolls and Hours (SEPH) for December was released. Although jobs tallies reported by this survey lag the timelier Labour Force Survey, they are nonetheless important because of the predictive value they hold for monthly GDP growth. Employment increased 0.3% in December by this measure, providing some positive news for next week’s December GDP report. However, disappointing retail, wholesale and manufacturing sales reports suggest some downside risk to Statcan’s flash estimate of a 0.3% monthly gain.

Other data released this week offered a timelier picture of activity. The February CFIB small business confidence report revealed that optimism about the next 12 months was the highest it’s been since early 2018. Confidence in the near-term outlook also increased but remained low, reflecting falling COVID-19 cases and the attendant easing restrictions. In a separate release, Statistics Canada revealed that firms of all sizes expect to boost their capital spending by 7.0% this year. Spending on construction activities is forecast to fully recapture last year’s losses. However, machinery and equipment expenditures are expected to only partially recoup 2020’s weakness.

All told, we agree with Governor Macklem’s assessment that full recovery is still a long-ways away, but progress is definitely being made. Indeed, the SEPH survey painted a better picture of December’s jobs market, small business optimism is on the rise (albeit vulnerable to the path of the virus), and the government will do its part to bolster capital spending this year. Vaccine approval is similarly encouraging. Despite a lower clinical efficacy than those currently in use, and some international debate as to its appropriateness for the older population, the AstraZeneca jab has the potential to give the economic recovery a proverbial shot in the arm.

Business surveys already reported for February have generally been as strong, or stronger, than the surveys for January, consistent with high readings again for the ISM indexes; we forecast a rise in the manufacturing index and no change in the services index. Survey readings are likely being boosted by optimism about COVID and fiscal stimulus.

The employment data have been much weaker than the spending data and the survey data over the last two months, with payrolls up just 49k in January after declining by 227k in December, but the February report will probably show momentum starting to pick up again. More improvement is likely as COVID restrictions are eased further. Recovery will likely take a while; payrolls are down by 9.9mn since last February (pre-COVID). The unemployment rate is officially 6.3%, but we estimate a 9.7% rate after adjusting for a COVID-related decline in the participation rate as well as lingering classification issues.

The Canadian economy continued on the road to recovery in the fourth quarter of last year. GDP likely rose by 7.5% (annualized) as consumers and businesses better adapted to the challenges posed by the pandemic. Firms conducted more business online and households spent a record amount through e-commerce platforms. Moreover, Canada’s housing market continued to run red hot, with residential investment poised to advance 10% in the fourth quarter. Still, surging caseloads and tougher restrictions likely weakened economic activity towards the end of the quarter. While provinces are gradually easing restrictions, and activity is picking up, the emergence of more contagious COVID-19 variants, and the slower-than-expected vaccine rollout, could yet force future lockdown measures. It will be a bumpy road ahead for the Canadian economy.

While Q4 has shaped up to be stronger than expected, we look for a more muted performance into year-end with industry-level GDP forecast to remain unchanged in December. This is well below StatCan tracking for 0.3% m/m and while these estimates have proven conservative thus far, service sector headwinds will exert a sizeable drag in December. We anticipate a pullback in retail and wholesale trade along with further declines in heavily affected areas like arts/recreation and food services, while energy will be one of few bright spots on the continued recovery in crude oil production. New flash estimates for January warrant attention alongside the December results as more stringent lockdowns across Eastern Canada are expected weigh heavily on economic activity.

We look for the international trade deficit to edge wider to $2.0bn in January as a temporary hit to auto production weighs on total exports, while imports should see a muted rebound from their 2.5% decline last month. Looking past motor vehicles we look for a solid performance for ex-auto exports, consistent with strong foreign demand as industrial activity continues to recover south of the border. However, volumes should paint a more downbeat picture with nominal exports supported by a surge in factory prices.