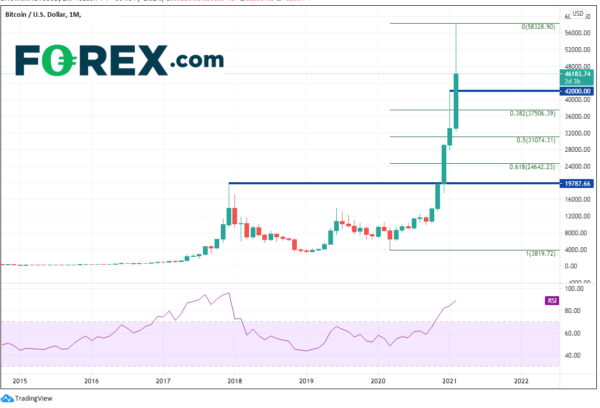 Fed Chairman Powell provided testimony to Congress last week regarding Monetary Policy.  He noted that the Fed was in no hurry to take its foot off the easing pedal and that although inflation expectations have been creeping into the markets, the Fed views this as a sign of confidence for the recovery.  This managed to keep rates down for about 1 day, until they took off.  We’ll have to watch this week to see if there will be follow through.  The RBA meets on Tuesday, and we’ll get their take on move in yields.  In addition, the UK releases their spring budget on Wednesday.  On Thursday, OPEC meets.  Oil traders will be keen to see if they raise output now that price has been on such a tear higher.  The week culminates with Non-Farm Payrolls on Friday.

As mentioned above, Federal Reserve Chairman gave his semi-annual testimony to Congress on Tuesday and Wednesday last week.  In addition to noting that current inflation expectations and the rise in yields were transitory and unsustainable, he noted that the Fed will keep stimulus in place until inflation is above the Fed’s target of 2%-3% for some time and maximum employment is achieved.  In addition, he encouraged the government to provide more fiscal stimulus (ie the $1.9 trillion stimulus package) in order to help the struggling economy.  However, the Fed hasn’t been the only one ringing the stimulus bell this week.  In addition to the Fed, Bank of Canada’s Tiff Macklem said, given that a “complete recovery is a long way off, monetary policy will need to provide stimulus for a considerable period”.  Also, the RBNZ met last week.  Members agreed that the central bank would remain on hold until CPI and Employment targets were met.

Low yields, until they’re not

On Thursday, with yields already drifting higher throughout the month, the US Treasury auctioned off 7-year bonds. The auction did not go well, as there was little interest in buying bonds in the belly of the curve.  Low demand means lower prices for bonds.  And lower prices mean higher yields.  The US 10-year Treasury spiked to 1.6%. For the month of February, US 10 yields are up roughly 40 bps.  However, the US isn’t the only place yields are rising.  Australian 10-year yields were up 45 bps last WEEK!  New Zealand 10-year yields were up 40 bps last WEEK.  The RBA had to step in and buy additional 3-year bonds on Friday in order stabilize its Yield Curve Control (as part of Quantitative Easing).  The RBA incidentally meets on Tuesday for its Interest Rate Policy meeting.  Comments will be watched closely to see how RBA Governor Lowe responds to the spike in yields.  In addition, Powell will be speaking Thursday on the US economy at the WSJ Jobs Summit.  Watch for comments from other central banks around the globe to see if they can talk down yields.  The bond market will surely be watching!

Help in on the way for the UK

As the UK looks to begin exiting the lockdown on March 8th, Rishi Sunak will outline the Spring Budget for the UK.  However, many businesses won’t be to reopen until April and May.  Watch for the budget to extend the current furlough program and continue supporting businesses.  Sunak is may also include new measures to help firms get going again, such as extending the business rates holiday, which are set to expire in April.

Tensions will be running high at OPEC

OPEC+ will meet on Thursday to discuss oil production and output.  Recall that at the last meeting, Saudi Arabia agreed to cut production by 1 million barrels per day during February and March, so that Russia could increase their output.  However, don’t expect Russia to return the favor this week. With WTI crude oil trading near $61.50, price is up nearly 18% in February alone.  Watch for members to increase output at this meeting as expected demand has picked up due to the vaccine rollouts and draws on supply over the past 2 months.  Everyone expects a raise in output, the question will be:  How much?

There are a few lingering earnings reports due out this week at the end of earnings season.  Traders will be watching Zooms guidance as the world slowly tries to move back to normal.  Other important earnings reports are as follows:  ZM, FRES, NIO, SNOW, PSN, POLY,  AVGO, WMH, COST, TGT, PSO

The beginning of the month means the beginning of month data. This weekend we will get China’s PMI data for the month for February.  The world will be watching to see if it is comparable to the Preliminary PMIs from around the world earlier in the month.  The US will also its ISM Manufacturing PMI on Monday, and Germany will release employment data on Wednesday.  The Friday, the US will report Non-Farm Payrolls for February.  What will traders be most interested in this week:  Anything that has a pricing component as markets are looking for any clues towards a rise in inflation!  Below is the more important economic data for the week:

Chart of the Week: Monthly Bitcoin

With so many great charts to choose from when month-end falls on a Friday, the monthly Bitcoin chart is, by far, the most impressive.  This chart was chosen to show the pure enormity of the move in February and to show how much more Bitcoin can pullback, before reaching meaningful technical levels!  As this is a monthly timeframe, this chart is mainly for those who HODL.  The cryptocurrency reached a high of 58,354 in mid-February, before pulling back to close the month.  Bitcoin closed February up over 40%, despite the late month pullback,  the 5th straight monthly advance.   Support on a monthly timeframe is at the January highs of 42,000, then the 38.2% Fibonacci retracement from the March 2020 lows to the February highs, near 37,506.  Below there is the 50% retracement from the same timeframe near 31,074. (NOTE: on a 240-minute timeframe, support is near 43,750.)  On a monthly timeframe, there is one resistance level, which is the all-time highs.  The volatility is shows in the candles, so be careful to those who are trading (as opposed to investing).

With the volatility in yields last week, central bank meetings and speakers, the OPEC meeting and Non-farm payrolls, this could be a volatile week.  Prepare. Be ready for anything. And use stops.  Don’t let the market carry you out!