What Does the UK Budget Hold for Sterling? 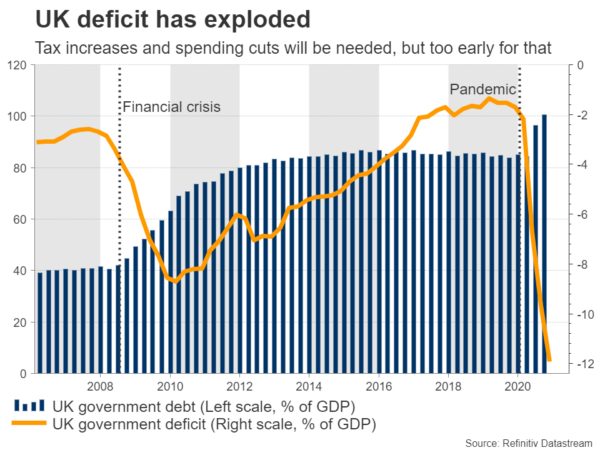 The Chancellor of the Exchequer will unveil the latest UK Budget on Wednesday at 12:30 GMT. It will likely include another massive round of spending to safeguard jobs and boost the recovery. Rumors suggest taxes on corporations might be raised as well to repair the hole in public finances, but it’s probably too early for that. As for sterling, with the UK reaping the benefits of early vaccinations, the overall picture seems positive, especially against the growth-starved euro.

It is show time in the UK, where Finance Minister Rishi Sunak is about to reveal the government’s latest fiscal plans. He is expected to deliver a wide range of spending measures to nurture the recovery, such as extending the furlough scheme that keeps workers in their jobs and the generous relief programs for smaller businesses, at least until the economy reopens in June.

But the real question is whether this spending boost will be matched by tax increases to rein in the massive deficit that the pandemic forced the government to run. Speculation is running rampant that Sunak will hike the corporate tax rate and perhaps go after investors too, by raising the capital gains tax.

The corporate tax rate currently stands at 19% and some expect Sunak to lift it towards 23% over the coming years. Meanwhile, capital gains could begin to be taxed at higher rates, more like regular income.

Tax hikes will likely be postponed

Now to be clear, one does not simply raise taxes during a crisis. Timing matters. Increasing the tax burden on companies right now could lead those firms to cut back on investment and hiring, sabotaging the very recovery that the government is trying to enable. It would be economically disastrous.

Sunak knows this. He will not risk shooting himself in the foot. The gargantuan deficit has to be brought under control but only at the right moment, probably after the economy has started healing.

As such, the most likely scenario may be that Sunak delivers on the spending tomorrow, but postpones most of the tax increases until the Autumn Budget, when the economy will hopefully be out of the woods. Just talking about being committed to fiscal discipline and laying out plans for raising taxes in the future is enough to keep everyone happy for now.

In other words, the government might provide a blueprint for major tax changes down the road, but refrain from pulling the trigger until the crisis is over.

If the Chancellor pulls off this balancing act, not going heavy on taxes and focusing on investment to prevent permanent damage to the British economy, that could be good news for the pound.

The outlook for sterling seems particularly bright against the euro. The UK is about to reap the benefits of its early vaccination campaign, with hospitalizations and deaths declining dramatically, allowing the economy to re-open in a sustainable manner. Meanwhile, fiscal stimulus will probably remain ample and the Bank of England doesn’t sound worried about the recent rise in bond yields, believing it reflects an improving economic outlook.

The opposite is happening in the Eurozone. The vaccine roll-out has been painfully slow and the much-anticipated recovery fund still hasn’t been distributed. Meanwhile, senior ECB officials are openly warning that they could expand their QE program to fight the spike in yields.

Taking a technical look at euro/sterling, if sellers manage to pierce back below the 0.8600 handle, another test of 0.8540 seems likely.

On the flipside, if Sunak goes too heavy and too early on taxes, the pair could challenge the 0.8735 area again, where a break would turn the focus to 0.8860.

Having said all this, sterling’s fortunes against the dollar don’t seem quite as bright, considering the enormous relief package being prepared in Congress, the swift pace of US vaccinations, and the reluctance of Fed officials to push back against rising US yields.