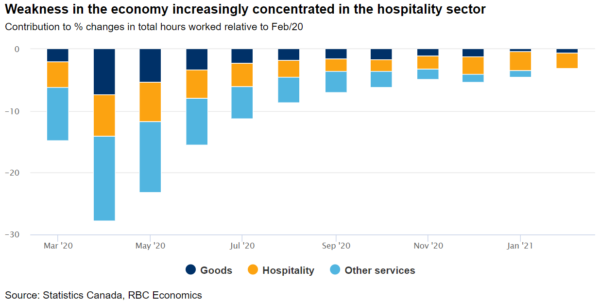 Next week’s Canadian GDP report is expected to confirm the economy continued to grow in January, despite virus-containment measures that put a lid on retail sales and kept the hospitality sector sharply depressed. We see little reason to deviate from Statistics Canada’s preliminary call for a 0.5% monthly gain. Manufacturing and wholesale sales both rose solidly in January and hours worked were up 0.9% despite a plunge in (mostly part-time) employment. We look for another increase in output in February of 0.3% with retail sales having risen by 4% as shopping restrictions were relaxed.

Make no mistake, businesses in high-contact service sectors are still suffering. Restaurants, hotels, recreation and other services made up 80% of the shortfall in total hours worked (versus pre-shock levels) across private-sector industries in February. Outside these industries, manufacturing sales softened, falling 1% in February according to Statistics Canada’s flash estimate, as production disruptions triggered by a global chip shortage continue to dampen transportation-sector supply. Still, a solid manufacturing PMI print for the same month hints at robust demand and production trends outside the auto sector, and we expect the March report next week will tell a similar story. CFIB’s monthly business barometer sentiment indicator hit its highest level in almost a decade in March.

Near-term concerns will remain focused on a third coronavirus wave in much of the country. Whether it can be blunted quickly enough by accelerating vaccine distribution remains the biggest question for the near-term economic recovery. Still, the light at the end of the COVID tunnel is getting brighter, with just over 10% of the Canadian population now having received at least one shot of two-dose vaccines. 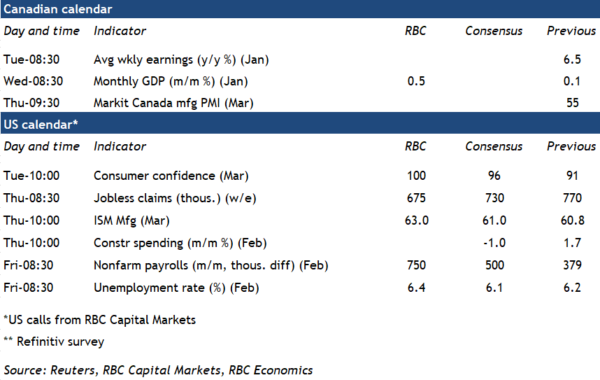