Week Ahead – US Jobs Report to Headline Quiet Easter Week 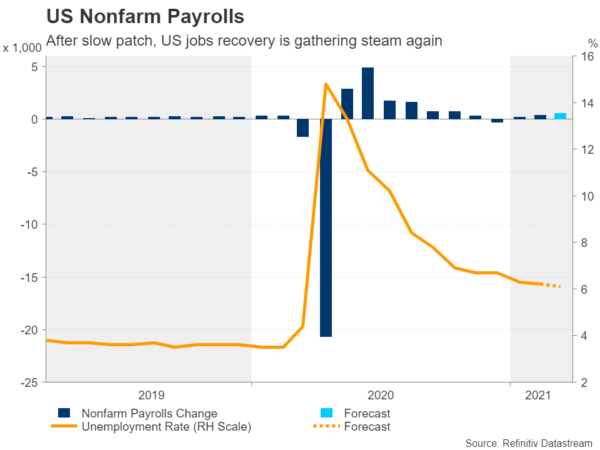 As markets reassess how soon European economies will be able to reopen, the March nonfarm payrolls report out of the United States will likely highlight the widening growth disparity between the two regions. The expected strong US data could help maintain the dollar’s upward drive but ultimately, its path will be determined by whether or not risk appetite bounces back. Risk sentiment has been fragile of late as an increasingly bitter spat between the UK and EU over vaccine exports and revived Sino-US tensions have added to the downbeat tone set by Europe’s lockdown woes. But in a week where trading is expected to wind down ahead of the long Easter weekend, there’s not much on the horizon that could turn sentiment around.

NFP could be a win-win for the dollar

The US economy was outperforming even before the Biden administration’s $1.9 trillion virus relief package came along. The additional stimulus, combined with an accelerating vaccination campaign, have put the US on track to record bumper GDP growth in 2021. The data due over the coming days are anticipated to further underscore the recovery.

In the run up to the all-important jobs report at the end of the week, the consumer confidence index by the Conference Board will be the first major release on Tuesday. The ADP employment reading will be watched on Wednesday as a precursor to Friday’s official report. Pending home sales and the Chicago PMI are also due the same day, and on Thursday, the ISM manufacturing PMI is expected to hit the highest since 2004 in March, extending the impressive rebound from the depths of the virus crisis.

On Friday, the consensus forecasts for the March NFP figure are a jump of 500k jobs. That would represent a further quickening of the pace of the jobs rebound following the slow patch at the end of 2020. The unemployment rate is forecast to have slipped from 6.3% to 6.1%, while average earnings are projected to have increased by 0.1% over the month.

With the lockdown-induced gloom holding back risk assets in recent days, a soft nonfarm payrolls print could deal a further blow to risk appetite and potentially boost the safe-haven US dollar, especially in the current environment where the US recovery appears to be on the most solid footing. However, if there’s a huge miss (which isn’t very likely) and Treasury yields drop sharply as a result, the greenback would almost certainly follow yields lower. Similarly, a positive surprise that is big enough to spark a significant rebound in Treasury yields would make it difficult for other majors to gain much traction versus the dollar from any subsequent improvement in the risk tone.

Battered aussie to keep an eye on Chinese PMIs

One of the currencies that’s taken quite a battering against the greenback over the past week is the Australian dollar. The Reserve Bank of Australia’s resolve to keep a lid on Australian government bond yields is the main reason why the aussie rally has run out of steam. But investors are also worried a slower recovery in Europe will mean less demand for commodities such as basic resources and mining products, which Australia is a major exporter of. All this has narrowed the spread between Australian and US 10-year yields, which the aussie has been tracking quite closely lately.

But in the absence of any key releases next week, there’s not a lot that can inject a fresh dose of optimism for Australia’s outlook. Domestic data will include building approvals on Wednesday, and the AIG manufacturing index, the final February retail sales report and trade figures, all on Thursday. But there might be a bigger reaction in the aussie to Chinese manufacturing gauges. The official manufacturing PMI is out on Wednesday and will be followed by the Caixin/Markit manufacturing PMI on Thursday. Both PMIs have been trending lower since late 2020, confounding the global bounce in manufacturing output. If China’s manufacturing activity decelerates further in March, it could further dampen the outlook for the global recovery outside of the US, weighing on sentiment and in turn, the aussie.

In Japan, there’s a busy data schedule ahead with February unemployment and retail sales numbers coming up on Tuesday, the preliminary industrial output reading on Wednesday and the Bank of Japan’s quarterly Tankan business survey rounding things up on Thursday. Japan’s economy seems to be weathering the pandemic storm somewhat better than many of its peers, yet the yen has depreciated quite substantially in 2021. Rising yields globally have been crippling for the yen as Japanese government bond yields have barely budged above zero due to the Bank of Japan’s tight yield curve control policy.

However, the latest fears about the European recovery on the back of the renewed lockdowns have boosted the safe-haven Japanese currency not just against the euro but most other majors as well. If Europe’s virus and vaccine troubles continue to dominate the market theme in the coming days, the yen looks set to extend its gains.

The euro on the other hand could plumb fresh lows against the dollar and yen if there are no positive headlines coming in Europe’s way. The EU is struggling to get a grip on its vaccine mess and each attempt to put things right seems to be making matters worse. The block has come under fire from governments and vaccine manufacturers for its plans to restrict the export of EU-produced Covid shots. With EU nations still lagging well behind Britain and the US in the vaccination race, investors are becoming increasingly pessimistic about a summer reopening of the Eurozone economy as it will be difficult to relax virus measures when infections are rising and vaccine intakes are low.

Looking at next week’s data, the economic sentiment indicator (Tuesday) and the flash inflation print (Wednesday) are the only important releases. The Eurozone’s headline rate of inflation is anticipated to edge up to 1.3% year-on-year in March, though it’s unlikely to alter expectations for ECB policy.

Across the channel, the second estimate of fourth quarter GDP due on Wednesday is the only notable item on the UK’s economic agenda. The pound has been caught in the euro’s vaccine storm as the UK’s supply of Covid jabs faces significant disruption from any EU decision to limit exports. But that’s not the only setback for the pound. Prime Minister Boris Johnson has warned Europe’s third wave could soon hit the UK, potentially derailing Britain’s own lockdown exit path.

Hence any improvement in sentiment towards the euro could benefit the pound too over the next few days and vice versa.

Can OPEC+ halt slide in oil prices and loonie?

Finally, OPEC and it’s non-OPEC allies will be holding their monthly output meeting on April 1. After the damage done to the demand picture for oil from the extended lockdowns in Europe, the major producers will probably again hold off from raising their output quotas just yet. This should provide some support to oil prices, which have been hammered from the gloomier outlook in Europe.

A rebound in crude oil could lift the oil-linked Canadian dollar too, which has pulled back from three-year highs amid a resurgent greenback. Domestically, the monthly GDP estimate due on Wednesday could attract attention, but loonie traders will mainly be watching for fresh clues on future production by OPEC+ countries as well as how the market mood evolves after a turbulent week.