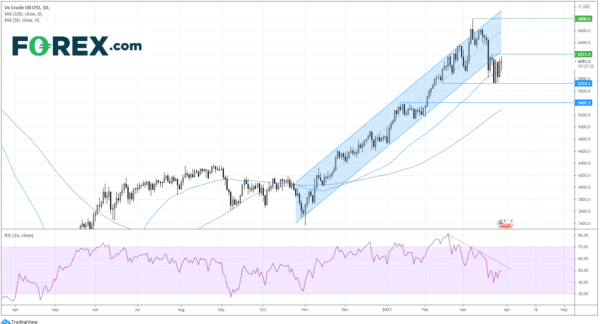 Oil prices were on a roller-coaster ride across the previous week, with swings on two consecutive days of 6%, as the bears and bulls tussled over demand concerns, amid rising covid cases, and supply issues amid the blockage in the Suez Canal, a key shipping route for oil.

With covid cases rising in Europe and lockdown restrictions tightening, the outlook for oil has weakened. Increasing covid cases in key developing markets such as Brazil and India are also unnerving investors, overshadowing the indications that the US is firmly on the right path to economic recovery.

Weak inventory data has intensified those concerns with the EIA update for the week ending March 19 showing 1912k rise in inventories, versus expectations of a 0.272 million contraction.

After 6 days of blocking movement through both directions in the Suez Canal, the Ever Given has finally been moved. Traffic along one of the most important trade routes in the worlds has returned, meaning that this is no longer is issue for oil markets.

Attention is turning firmly towards the OPEC meeting. The recent swings of the past week highlight that the oil market is still extremely vulnerable to both bullish and bearish stimulus. Only a sustained increase in demand will rectify this and we are still some distance from that goal.

Given the high inventory levels, after crude stockpiles rose for a fifth straight week, rising uncertainty surrounding demand and price weakness, the broad expectation is for OPEC to keep oil production steady for another month. Both Saudi Arabia and UAE have expressed their wishes to tread lightly when it comes to how much oil is in the markets.

However, its worth keeping in mind that even if OPEC does keep production levels steady in April, countries that are exempt from the output cuts such as Libya and Iran are increasing their output.

Where next for oil prices?

The price snapped the upward trend falling sharply lower out of the ascending channel and through its 50 sma for the first time since November. The RSI is in bearish territory indicative of further losses.

After failing to break below 57.20, the price has traded in a range capped on the lower side by 57.20 and on the upper side by 62.00. This sideways movement could continue ahead of the OPEC announcement.

Buyers will be looking for a move above 62.00 and back into the ascending channel at 62.50 to bring the recent 68.00 high back into focus.

Any sense that OPEC could start to reduce output cuts could unnerve oil markets. Sellers will be looking for a break out below 57.40 for a deeper move lower to 54.00 resistance turned support from mid-January and on to test the 100 sma at 52.80.