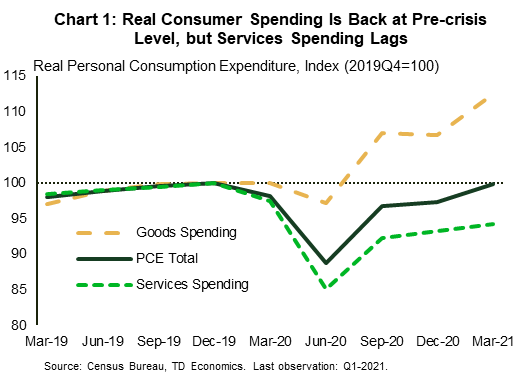 America’s economic recovery picked up steam at the start of this year. The advance GDP report showed that the economy expanded at a robust pace of 6.4% (annualized) in the first quarter – slightly ahead of market expectations. The gain was fueled by a subsiding health crisis and the latest dose of fiscal stimulus. Powering growth was consumption, which expanded at 10.7% (annualized), while fixed investment and government spending also lent a hand. Overall consumption is now back at the pre-pandemic level, but this is largely the result of a surge in goods spending (Chart 1). Spending on services meanwhile, remains roughly 6% below its pre-pandemic level.

This morning’s personal income and spending report adds additional color to recent economic momentum. Supported by the injection of federal cash into the wallets of consumers (i.e. the $1,400 stimulus checks issued recently), real disposable income rose a whopping 23% in March, while real spending rose 3.6%. Momentum in consumer spending is solid heading into the second quarter thanks to improving consumer confidence and an appetite to spend some of the accumulated savings, which are now almost $2.9 trillion above the pre-crisis level. With vaccinations continuing at a rapid pace, the pandemic’s grip on the American economy will loosen further. This will allow more leisure and hospitality establishments to turn on the lights and welcome back customers, and should be an important tailwind for services spending.

At the same time, inflation is picking up steam. The personal consumption expenditure price index accelerated sharply to 2.3% year-over-year in March, with higher energy prices the main lift. Meanwhile, the Fed’s preferred measure of inflation, core PCE, rose to 1.8% in March (Chart 2). We expect inflation to continue moving higher in the near-term, partly due to an improving demand backdrop and partly due to transient base effects.

Strong growth and rising inflation would typically nudge the central bank to start thinking about raising rates. But, Federal Reserve Chair Jay Powell gave no hint of this at his press conference this week, instead continuing his cautions tone that the economy still has a long way to go. Given that recent data has continued to come in well ahead of expectations, the Fed is likely to end up hiking rates before their current communication would suggest. We expect the first hike in the final quarter of 2022.

Keeping with the theme of above-expectation economic growth, recent policy initiatives proposed by President Biden also pose upside risk to the forecast. This week, the President unveiled the American Families Plan, which calls for $1.8 trillion in new spending on childcare, education and paid leave. The plan would be largely paid for with higher taxes on the wealthiest Americans. As of now, it remains unclear what exactly will pass and when, but given their size, they are an item that we will keeping a close eye on.

As April draws to an end, COVID-19 caseloads in Canada are finally beginning to fall. The vaccination campaign has made good strides over the past few weeks, with nearly 30% of population having received at least one jab – double what it was at the start of the month. Rising vaccination rates and improving vaccine availability will pave the way for economic re-opening. However, as long as hospitalizations remain high, restrictions will remain in place, suggesting that we are likely still weeks away from any easing.

While we continue to navigate this third wave, the economy emerged from the second wave of the pandemic in much better shape than was expected initially. The monthly GDP report for February showed that output rose 0.4% in the month, followed by an estimated 0.9% gain in March according to Statistics Canada’s preliminary estimate. Including the March estimate puts first quarter real GDP growth around 6.6% mark (annualized), and implies a level of economic activity just 1% below its pre-pandemic peak.

The hardest hit industries – recreation, hospitality, retail trade – have much more ground to recover, but they were making up some of it prior to recent restrictions (Chart 1). Output in those industries surged by 3.3% in February, compared to a nearly flat performance for the rest of the pack. Recent restrictions will likely reverse some of these gains, but with accelerating vaccinations, high-contact industries will once again lead the recovery train in the months ahead.

This is already evident in the U.S., which is ahead of Canada in its vaccination efforts, particularly of younger cohorts, who are more likely to spend time in social settings. Over 40% of people between ages 18-49 have received at least one dose of vaccine in the U.S., compared to just 10% in Canada. As a result, March sales at food and drinking places in the U.S. were just 5% below their pre-pandemic level – after being down as much as 22% in December (Chart 2). This suggests that spending on dining out and other services will rebound swiftly once vaccination broadens it reach.

With consumers and businesses adapting to the current environment, restrictions are becoming progressively less damaging. The CFIB small business confidence index weakened in April, but remained above the 50.0 threshold, indicating that more owners expect their business performance to improve rather than weaken. Anticipating better days ahead, businesses are increasingly in the hiring mood. The share of survey respondents planning to add to their payrolls outnumbered those planning to reduce staffing levels for the second month in a row. So, while next week’s job report may be a weak one, it is likely prove fleeting.

Given the Canadian economy recent display of resilience, the Bank of Canada dramatically upgraded its economic forecast last week. It is now expecting the economy to fully recover, absorbing any remaining slack, by the second half of 2022 rather than sometime in 2023. As such, we anticipate that the exit from ultra-easy monetary policy will also happen a little bit sooner, with the first hike in the overnight rate likely before the end of 2022.

The Canadian dollar has been on a spectacular run. Since the start of the year, the loonie has appreciated over 3% against the greenback, ranking it as the best performer amongst G10 currencies. At 81 US cents, this is the highest level the loonie has been since early 2018.

The rise in the Canadian dollar has occurred on the back of two strong narratives. The first is the run-up in commodity prices. With global manufacturing acceleratin