Week Ahead: Central bank Recap/Preview, the Recovery, and Jobs 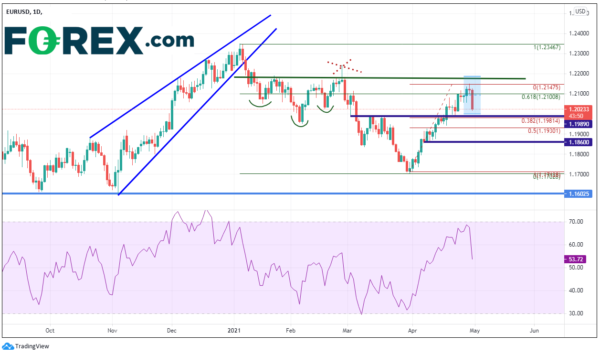 This weekend begins the month of May, and brings holidays on Monday in the UK, China, and Japan.  With a busy week to end April, including an extremely dovish FOMC and BIG tech earnings, the focus turns primarily back to the coronavirus, or let’s say the recovery from the coronavirus.  More central banks will be meeting this week to discuss monetary policy with the RBA and BOE on tap.  In addition, roughly halfway through earnings season, we’ll get reports from roughly 1,450 companies, however only a few could be market movers. Also, the beginning of a new month brings beginning of month data, including New Zealand’s Q1 Employment Change, the Employment Change from Canada and the much anticipated NFP report from the US.  These numbers will be telling as far as the recovery is concerned!

The Bank of Canada recently cut its bond purchasing program from C$4 billion to C$3 billion per week.  They are tapering.  However, parts of the country are still under lockdown due to the coronavirus. This includes Ontario, which reported on Thursday that their hospital ICUs are at capacity.  Although Canada reported +303,000 jobs in March, they are expecting -210,000 in April’s report on Friday (mainly due to lockdowns).  Contrast that to the monetary policy of the US Federal Reserve, which met this past week. The FOMC is committed to buying $120 billion in bonds and MBS per month.  Fed Chairman Powell said they will not taper until they see “substantial further progress”, which will take a while.  They also need to see a “string” of months of data which points towards reaching their targeted goals.  Coronavirus cases are down to only 55,000 per day (vs 300,000 on January 8th).  Over 30% of the population is fully vaccinated. The March jobs report was +916,000 and they expectation for April’s report is +900,000. By the way, yields are rising.  The European Central Bank is in the same book as the US, but not on the same page. Lockdowns and restrictions are about to expire, just as the vaccination rollout is finally picking up pace.  Christine Lagarde even said this week they she expects 70% of the EU population to have received at least 1 jab by the end of June!  So, who is right? When will the Fed signal tapering? The Fed is traditionally “behind the curve”.  Given that the Fed is looking for actual data and not forecasted data (i.e. June dot plots), they may not announce an intent to ease in the late summer or fall.  The timing of the announcement of the tapering will determine the directions for the markets.

This week, we’ll get to see which pages the Reserve Bank of Australia and Bank of England are on in the book. The RBA has previously signaled they with the Fed and the ECB.  As a matter of fact, after the last RBA meeting, the central bank started its second A$100 billion bond purchase program.  Don’t expect much of a change from the RBA this week, however they may address the rise in the Aussie as commodity prices rise around the world. The BOE is another story.  The UK is open for business! Retail sales for March were 5.4% vs an expectation of 1.5% and both the manufacturing and services PMIs were 60+, at best levels since the start of the pandemic. Vaccinations are continuing, with nearly two-thirds of the populations receiving at least 1 shot.  There is talk that the BOE may mention the forbidden word in the US – TAPERING! (I’m old enough to remember when there was talk the UK would bring rates negative?) The BOE has a targeted 875 billion-Pound bond purchase program, which it was supposed to reach at the end of 2021.  However, if they don’t slow the current pace, or taper, they will hit that limit sooner than expected. Of course, they can always expand the amount, as they have done twice before.

The coronavirus is still here

As great as it is talking about life after the coronavirus, there are still some countries that are in the throes of it.  India is feeling the most pain right now, with 300,000-400,000 new cases daily!  The world is rushing to their aid to try and vaccinate as many people possible.  Japan also has prefectures under State of Emergency until mid-May, including Tokyo, which is set to hold the Summer Olympics in July.

Whoa!  What a past week for earnings!  The big tech firms blew earnings estimates away, joining the banks with results much better than expectations. As mentioned above, roughly 1,450 companies report earnings this week.  However, none should be as dramatic as we saw last week.  Traders will be interested in LYFT and UBER, especially to see if they respond to the Biden administration’s comments that “gig workers should be classified as employees”.  Other noteworthy earnings this week are as follows:   PFE, LYFT, GM, UBER, PYPL, MRNA, SQ, NTDOY, DKNG

Along with the central bank activity this week, global manufacturing, services, and composite PMI Finals will be released. However, all eyes will be focused on employment data, as New Zealand, US and Canada all report this week.  Other important economic data is as follows: