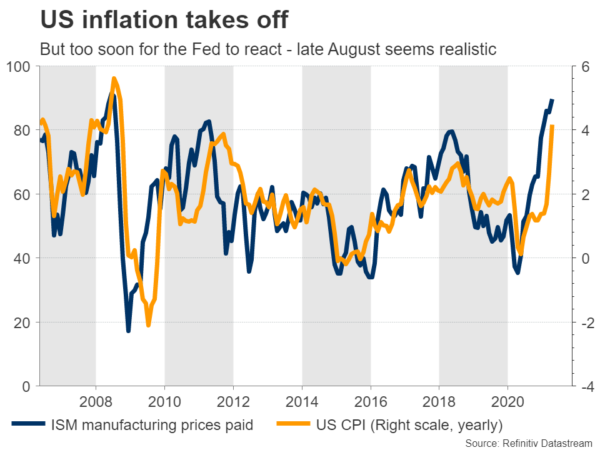 It was a wild week in financial markets. Stocks got smoked while the dollar clawed back some ground as inflation finally showed its teeth, reigniting worries about higher interest rates being on the horizon. The upcoming week seems calmer. There are no central bank meetings and the minutes of the latest Fed decision will likely be seen as outdated. Instead, all eyes will be on the PMI business surveys out of the Eurozone.

Concerns around cheap money policies being dialed back later this year came back to haunt markets lately, after a scorching hot inflation print out of America. Much of this spike comes down to base effects after last year’s collapse, but even stripping those out, inflation is still rising at an alarming clip as booming demand meets supply shortages and sizzling commodity prices.

The Fed has been adamant that this inflation episode is supply-driven and won’t last long, so monetary policy shouldn’t react to it. That said, even the most confident policymaker must have been shocked after this week’s data. Markets were stunned too and wasted no time in bringing forward the timeline for normalization. Eurodollar futures contracts now imply an almost 80% chance for a rate increase by December next year.

Taking a step back though, not much has changed. Inflation might be firing up but the labor market still has a long way to go. We had a massively disappointing jobs report and then an exceptionally strong inflation print, which might cancel each other out in the Fed’s eyes. The endgame is still the Fed scaling back its QE program and ultimately raising rates, but we are unlikely to get any concrete signals on that during the summer.

It’s simply too soon. Policymakers want to see continued improvement in the numbers, especially labor market data, before they put tapering on the table. A realistic period would be in late August, at the Jackson Hole economic symposium. Until we get closer to that point, it’s difficult to envision any sensational dollar gains or a real demolition in stock markets. The money printers are still working overtime.

The main event of the week will probably be the release of preliminary PMIs for May in the euro area. Rapid vaccinations have allowed several countries to reopen and the European economy is finally starting to show signs of life again. The upcoming numbers are expected to confirm that.

The services index, which accounts for the vast majority of the Eurozone economy, is forecast to climb to 52.0 from 50.5 in April, while the manufacturing index is expected to tick down but remain at an exceptionally elevated level. That would be great news for the euro, though the question is how much of it is already priced in. The single currency staged a meteoric recovery in Q2 as investors baked in the improving outlook.

In a nutshell, it’s difficult to get excited about the euro. Even though it may perform decently over the summer as Europe reopens properly and the Fed stays dovish, the longer-term path doesn’t seem bright. The economy is improving but at a snail’s pace, and unlikely America, government spending packages aren’t impressive. The ECB will lag many months if not years behind the Fed in normalizing policy, and that could ultimately show up in FX.

Flurry of UK data on the pound’s plate

It’s a super busy week in the UK too, where the jobs numbers for March will be released on Tuesday, ahead of inflation stats for April on Wednesday. The week culminates with retail sales for April and the flash PMIs for May on Friday.

The lion’s share of attention will fall on the PMIs as investors look for confirmation that the British economy is regaining momentum now that the vaccination program has entered its final phase and much of the hospitality sector is up and running again.

As for sterling, the overall picture seems bright. The Bank of England has taken the first baby step towards ending its QE program and investors seem to have concluded that the risk of a second Scottish referendum isn’t very high after the SNP failed to secure an outright majority in the local elections. With the economy healing its wounds too, the pound can’t ask for much more.

Over in America, the agenda is relatively light. The minutes of the latest FOMC meeting will hit the markets on Wednesday but considering the massive data surprises that we’ve seen since that event, markets will likely treat them as being out-of-date. With jobs numbers disappointing and inflation exceeding the wildest forecasts among economists, the outlook has shifted quite dramatically.

The Markit PMIs on Friday might be more interesting. They’ll give us a taste of how inflationary pressures evolved in May and whether the labor market bounced back. It could be a critical piece of information in the evolving Fed puzzle. As for the dollar, the ultimate trajectory seems positive, but it may take a while to get there.

Japanese, Canadian, and Australia stats also on the agenda

In Japan, the first estimate of GDP for Q1 is out on Tuesday. Forecasts point to a contraction as virus rules were tightened during that quarter. That said, the yen doesn’t react to economic data nowadays. Instead, its fate is linked to global bond yields.

In an environment where the Fed, Bank of England, and Bank of Canada start moving away from loose policies, the yen could be among the biggest losers as yield differentials widen to its detriment. The fact that Japan lags the developed world in vaccinations argues in the same direction. Outside of a massive unforeseen shock that sparks panic in global markets, there isn’t much that can rescue the yen.

Speaking of Canada,  inflation data for April are out on Wednesday. The loonie has gone on a rampage lately as the BoC started to scale back its QE program. With the economy doing well, oil prices being elevated, and some benefits from the gargantuan US stimulus packages likely to spill over into Canada, the outlook remains encouraging. The BoC Governor tried to talk down the currency lately, but outside of jawboning, there isn’t much the Bank can do.

Finally, Australia’s employment numbers for April will be released on Thursday, ahead of PMIs for May on Friday.