GBPUSD has found strong support at the 1.4100 psychological level, holding near the 40-period simple moving average (SMA). The RSI is ticking slightly up in the negative territory, however the MACD is holding below its trigger line.

In case the pair changes its short-term direction to the upside, the bulls will probably challenge the previous top at 1.4220. A break higher could last until 1.4345, which is the peak from January 2018.

Alternatively, additional declines may drive the price towards the 1.4007 hurdle, before the 1.3975 support comes into view. Beneath the latter, the inside swing high from May 6 at 1.3640 could be another level in focus ahead of the 200-period SMA at 1.3920.

Turning to the medium-term picture, the pair switched to positive mode after the rally off 1.3670. The 200-period SMA looks to be slowly strengthening the market’s outlook.

Summarizing, GBPUSD maintains a bullish bias in the short-term picture, whereas in the medium-term it holds a strongly positive profile. 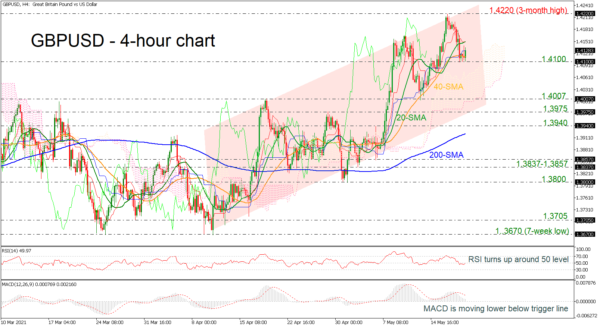