USDCAD is consolidating between its freshly found footing at 1.2012, a multi-year bottom, and the high of 1.2144. Nonetheless, USDCAD remains predominantly bearish, with the falling simple moving averages (SMAs) weighing on price improvements.

The Ichimoku lines are reflecting the pause in the pair’s decent from the 1.2653 high but are signalling that the price trajectory remains heavily tilted to the downside. Furthermore, the short-term oscillators are reflecting price’s negative preference despite marginal upticks in positive momentum. The MACD, in the negative zone, is holding just beneath its red trigger line, while the gliding RSI, is persisting in bearish territory below the restrictive line and the 50 threshold. Although the stochastic oscillator is in oversold regions, the upward pointing %K line has yet to clearly confirm increasing positive impetus.

If sellers remain in control, initial downside deterrence could emanate from the nearby durable support between the 1.1980 barrier, identified in May 2015, and the freshly touched low of 1.2012. This vital boundary also encompassing the 1.2000 hurdle could delay a price decline or provide a base from which the pair may develop certain price gains. Should sellers dive the price beneath it, they may then target the 1.1933 trough, while a downside extension past its 1.1919 lower wick could steer the pair towards the 1.1876 barrier.

If buying interest increases, initial upside limitations may come from the red Tenkan-sen line at 1.2055 and the 50-period SMA at 1.2085. If buyers drive past this and overstep the cloud’s upper surface at 1.2107, the pair may propel towards the resistance band of 1.2178-1.2202. Reviving extra upside momentum could then lift the price to challenge the next resistance border of 1.2251-1.2270.

Summarizing, USDCAD’s prevailing bearish bias remains difficult to dethrone. Yet, a shift in the pair above the 1.2202 mark could fuel efforts to overcome the 200-period SMA and strengthen optimism in the pair. 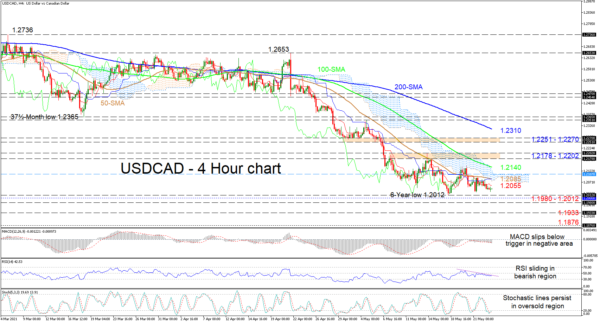