NZDJPY gained significant positive traction following the Reserve Bank of New Zealand’s rate announcement, stretching its one-year-old uptrend to a fresh 3-year high of 79.58 after a period of stagnation.

The technical picture is currently endorsing further progress in the market as the price is trading above its simple moving averages (SMAs) and the Ichimoku cloud, while the RSI and the Stochastics gear up in the bullish territory. The MACD, although below its red signal line, has also resumed its positive momentum.

For the bears to take control, the price would need to pull below the supportive 50-day SMA currently flat at 77.90. If that is the case, the 50% Fibonacci of 76.68 could immediately put some footing under the price ahead of the previous low of 75.61. Deeper, the 200-day SMA currently at 74.20 could be a more important obstacle to downside corrections given its resilience during the second half of 2020.

In brief, the recent bounce in NZDJPY has exposed the market to additional upside movements, shifting the spotlight towards the 81.55 barrier. 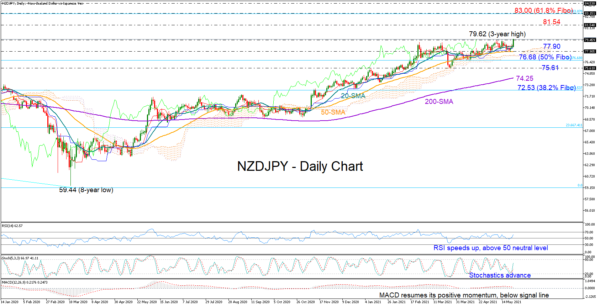